Many years have passed since the development announcement of Community Story Project. Even then the team Piranha Bytes Italia with Gothic Italia (www.gothicitalia.it), reference point in the Italian community, officially contributed to the different versions of Community Patch,  which finally made it possible to play Gothic 3 without bugs.

Later Mad Vulture Games, releasing the definitive Community Patch v. 1.75 – Gothic 3 Enhanced Edition, succeeded in optimizing many aspects of this game  … but there was something still missing.

(The page of CSP  on Gothic Italia site includes all the content, published until now, translated in Italian.)

At that time many little teams of fans dedicated themselves to amateur develpment, motivated by the desire to improve an incomplete game, but with high potentialities and prestigious origins. For example, Quest Pack and Content Mod revitalized the game, improving its plot and its gameplay.

In the meantime the Community Story Project team proposed very challenging and innovative projects, to enhance some aspects of Gothic 3 that nobody had examinated until then. 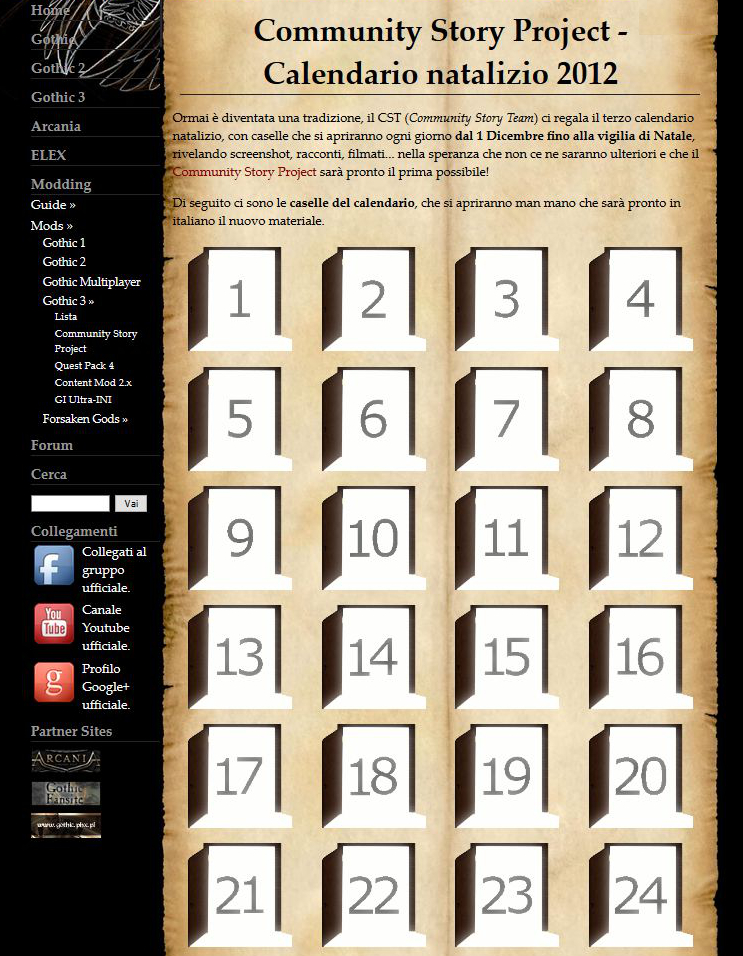 (This is one of the many Advent Calendars, that Italian team has recreated on their site.)

From the very beginning the Italian team showed interest in the project and dedicated itself to translate the content published by Community Story Team on its site, looking for collaboration with them. As the years go by, the amount of new contents, calendars, interviews and videos, punctually translated and subititled in Italian, has became remarkable and it can be entirely consulted by the community in the dedicated page (www.gothicitalia.it/modding.aspx/articolo/community-story-project) of Gothic Italia.

In addition to German and English versions, now the Community Story Project will be officially available also in Polish and Italian versions.

(Every video released by the CPT has been translated and adapted by Domenico Giambra “Zorinik”.)

The Community Story Project is still in development mode and the Italian team is going to to translate not only the dialogues subtitles, but also the many menus and all the new elements in the game, adapting and optimizing them in the best possible way.

As it had already been done with the Enhanced Edition of Gothic 3, an Italian version of the installer will be available and integrated in the main multilanguages system; the same will be done for the readme files and the possibile complete handbooks.

The Piranha Bytes Italia team and the Gothic Italia community, as always, promote and will promote the project even in their area hosted on the forum (forum.multiplayer.it/forumdisplay.php?332-Gothic-Italia) of  Multiplayer.it, reference point for the videogames world in Italy. Keeping on believing in these wonderful initiatives with passion and dedication, thanks to the communities and to fans, these digital treasures, worthy of being reevaluated, are going to be born again.

(In exclusive for the ‘Community Story Project’ the new logo of Gothic Italia, realized by Gianmarco Giuliana “Warg”.)

Since 2003 Gothic Up is the biggest Polish website about the Gothic and Risen series. Now they’re also including Elex. Despite all the time that passed and many changes in in the lifes of all members they hold together. Piranha Bytes games are their favorites. Since the first days they’ve been supporting the development of mods, movies and much more for Gothic and Risen. That’s why they are working together with the CSP and report regularly about it.