Our Advent Calendar has a long tradition, but even our Easter Specials meanwhile became legendary. Last year we’ve presented a playable CSP Easter-Mod, this year we return to the fantastic details of our CSP. But have a look on your own:

But what is this mysterious place? Find it out after the CSP has been released!

HerrFenrisWolf has written a fantastic short story for those of you who don’t want to wait that long:

Master Tondal had to sit. His heart jumped in his chest, as if it wanted to escape from there. For a short period of time everything went black before his eyes and the sounds of his surroundings were dampened.

He took three deep breaths until his perception of the world became normal again. He took a look around the room and saw that only two other mages were with him. Despite the catastrophe in progress the old and grey Juno put on the same stoic face as always. Only his messy coat was a sign that something was different today.

Next to the old man who was leaning against the wall and listening for any sign of their enemy, Almer was pacing around. His gaze was unsteady as he looked around the room. His hair was felted and he had bruises in his face. Tondal pitied Almer. His consecration, which had turned him from an adept to a mage happened only two years ago. Tondal and Jura had had their time and had lived their lives but Almer had been a promising adept. He would have had the potential to become a great master.

Tondal smirked a little as he remembered Almer as an adept. More than once he had to clean the statue of the grandmaster under Juro’s severe supervision. Long ago, in his adept years in the monastery in Nordmar, Tondal often had to clean the whole library. Cleaning the grandmaster’s statue was a walk in the park compared to that. After Almer’s consecration there hadn’t been many adepts left.

The master himself took care of all the valuable assets in the keep and had them transported to a secure place before it was too late and all of them would be lost. Among these valuable assets were the remaining adepts.

Outside of the room the sound of fighting was unbearable. The screams of dying people and those of steel cutting through air and flesh took turns. As if stung by a blood fly Almer leaped up after a particular agonized scream could be heard: “Out there our brothers are dying! And what are we doing? We’re hiding here!”

Juro raised his hands in a demonstrative slow way and spread his thin fingers while talking in a shaky voice: “We’re withered, lad. Every bit of magic that we had, was used against those wildlings. We’re useless in a melee fight. We can’t help our fighters out there, regardless of their numbers.”

“And afterwards?” The wildlings are destroying our temples, disgracing our sanctums and overrun our lands! Now they are here and are murdering our brothers. Should we wait here in peace and wait for them to come in and slaughter us, too? I’m not ready to surrender to this destiny without a fight!

As Almer spoke those words, tears of frustration formed in his eyes. But his words were predominated by a sinister rumbling. Through one of the room’s windows they could see one of the keep’s towers burning and collapsing. Sparks sprayed in the afterglow of the setting sun. While Tondal scratched his beard, Juro tried to calm the young mage: “You’re a good boy, but not nearly as experienced as the master or myself. Our powers are regenerating slowly, while hiding out here. You never had time to learn this.”

“Then I’m even more useless, than I thought.” Juro’s words accomplished the opposite of what he had hoped for. At that point Tondal reached in his robe and pulled out a big mana potion. He gave the skilfully decorated flask with the pale blue substance to Almer and said: “Drink this. I had hoped to rescue you in some way, but if you want to die side by side with two old men, it will be an honour for us.

Almer drank the liquid avidly. Tondal realised that all three of them had to accept their fate. Piece by piece they had lost the keep. Hallway by hallway the invaders were advancing. Corner by corner and gate by gate the friars had fallen until these last three remaining men had made it to the top of the keep. Soon enough the merciless conquerors would be knocking on this door too and it would be time for the final battle.

Minutes passed like hours and it got quieter out in the hallways until they heard heavy steps coming their way. Incomprehensible orders were yelled and a heavy pounding against the door started. Juro faced the door and raised his hands in a commanding gesture. Thin fibres of cold blue energy wove from his hands into the floor. Flagstones broke from the floor and began to form a humanlike but much coarser figure. The face of the stony servant seemed to be just as strict as his master’s. Stone crunched against stone and the conjured golem obeyed his master’s wordless command.

Before the wooden door could be broken, the golem threw himself against it to provide one last barrier between the attackers and the mages. But their attacks didn’t fade. On the other side of the door a bright light appeared and burst out into the chamber. As if struck by lightning the stony warrior, defending the mages just a second ago, burst into a million pieces.

A sinister figure entered the room. Before the mages stood a slaughterer in an armour of steel. The steel was dirty and smirched with blood all over the armour. He stank and his sounds were animalistic. This fitted to the rest of his appearance, which was less that of a human and more that of a steely monster, a creature.

He held a huge battle axe with both hands and slowly stepped towards the mages which lay on the floor, knocked over by the blast.

Juro was the first one able to get up again, but it was obvious that his evocation had exhausted him. The monster ignored the old man, as if it knew that he was no thread anymore. It walked right to the youngest mage who looked at it with fear in his eyes. Master Tondal got up too and stabilised himself against the wall. In the depth of his mind he tried to find a spell suitable for this situation, most likely the last spell he would ever use. Tondal was younger than Juro and far more experienced than Almer. He was on the peak of his career and therefore had regenerated the most power. In this moment a particular mighty spell came to his mind and he prayed that he had enough time to cast it.

The slaughterer stood before Almer and struck out with his battle axe. Suddenly Juro launched into the steel warrior, wielding a broom he had found in some dark corner of the room. The monster seemed more amused than threatened, left Almer for good and wiped the old mage aside with one mighty blow from its axe.

Juro slumped down dead on the spot. Almer yelled in anger and cast a magic lightning against the slaughterer, whose armour seemed to melt. Tondal was quite proud of his student. The art of casting this spell was a thing he had taught Almer a long time ago.

A high-pitched howl escaped the creature, but then it composed itself und threw its axe after Almer. The young mage was literally nailed against the wall, but he lived. Slowly the slaughterer advanced. Standing in front of Almer he dragged his helmet from his head and revealed the face of a man in his best years. His noble facial features were distorted by pain and his skin was red as if someone had thrown boiling water in his face. The man raised his right hand into the air as if he was grasping something. Light, without any apparent origin, flew out of the rune and healed the burned skin. With his other hand he pulled a dagger out of his belt and pressed it to the mage’s throat.

“In the name of Innos, burn you damned heretic!” he spat at Almer and cut his throat.

Now the paladin turned to Tondal. The master hadn’t moved a bit the whole time and didn’t seem to be a danger for the champion of Innos. He would make short work of this last mage. He rose his magical sword another time and spoke: “Sinners and heretics, this place shall be your grave!” Gently Tondal touched the paladin’s face with his hand and replied: “As it shall be yours.”

Suddenly the whole battlefield sank in a scary silence. Nothing was moving anymore and it seemed as if a cold breeze moved through the heavily damaged keep. The life soaked from the stone walls and the last thing that could be heard sounded like the flap of a giant wing.

Some more images of the mysterious ruin: 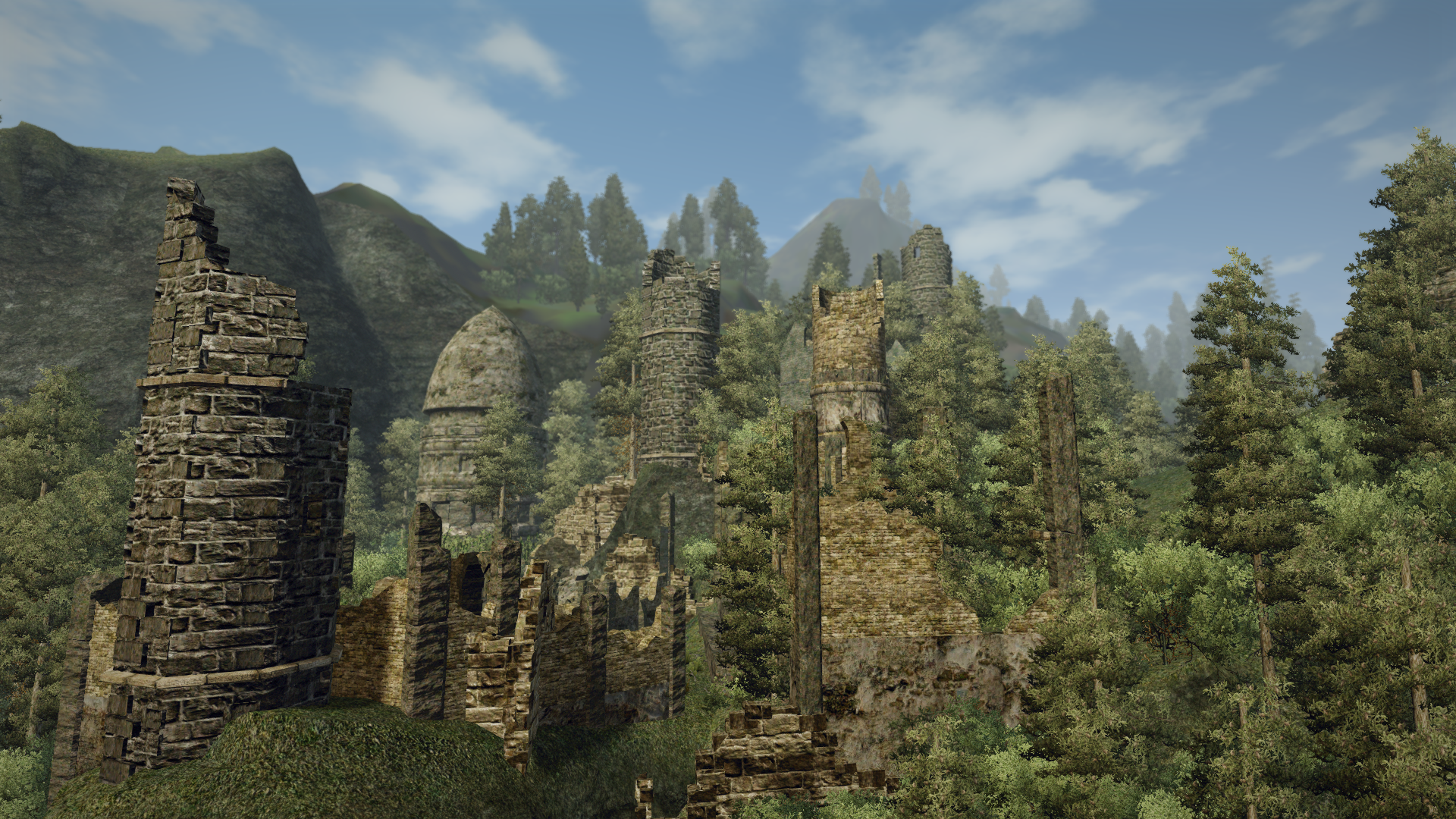 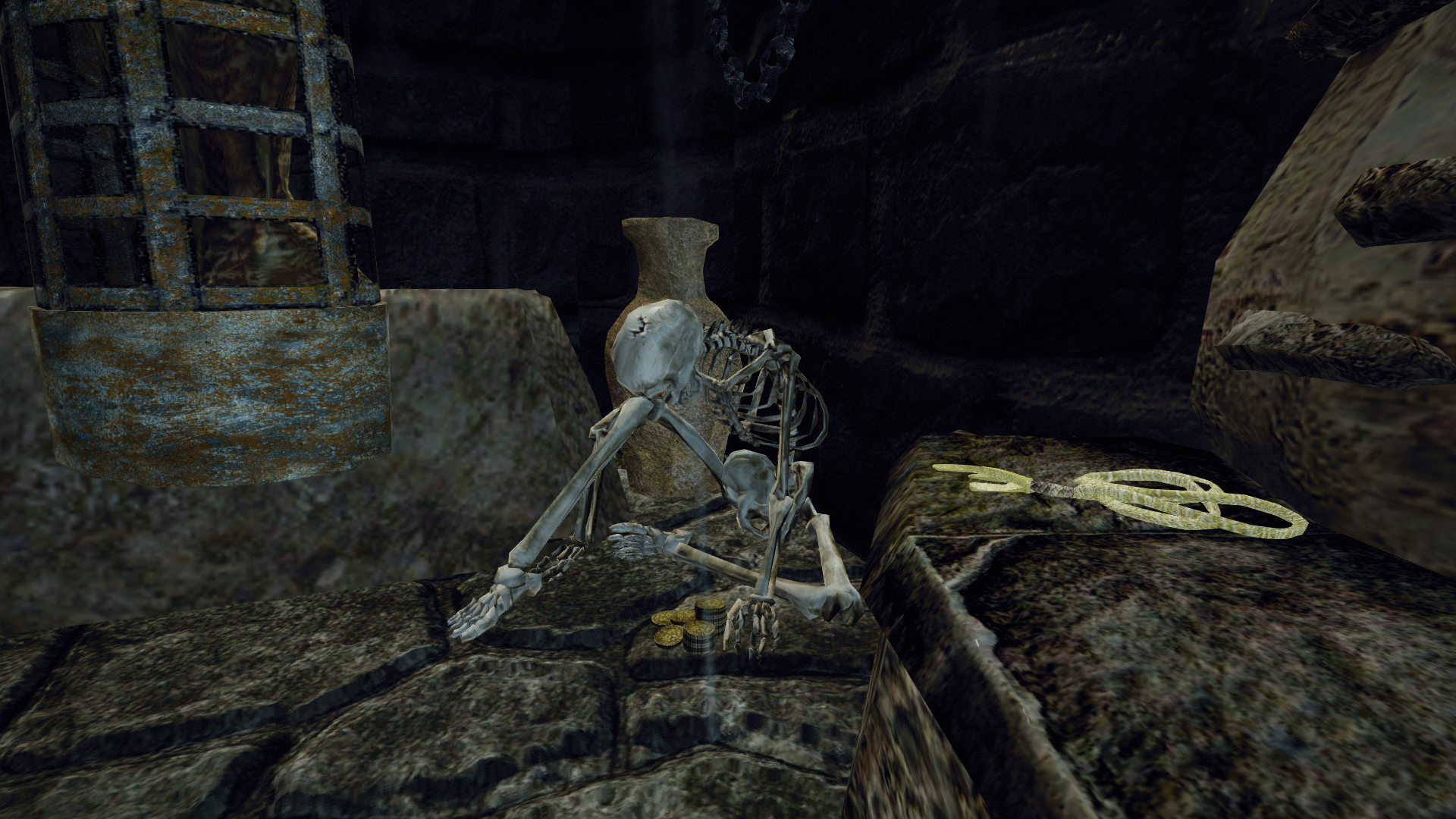 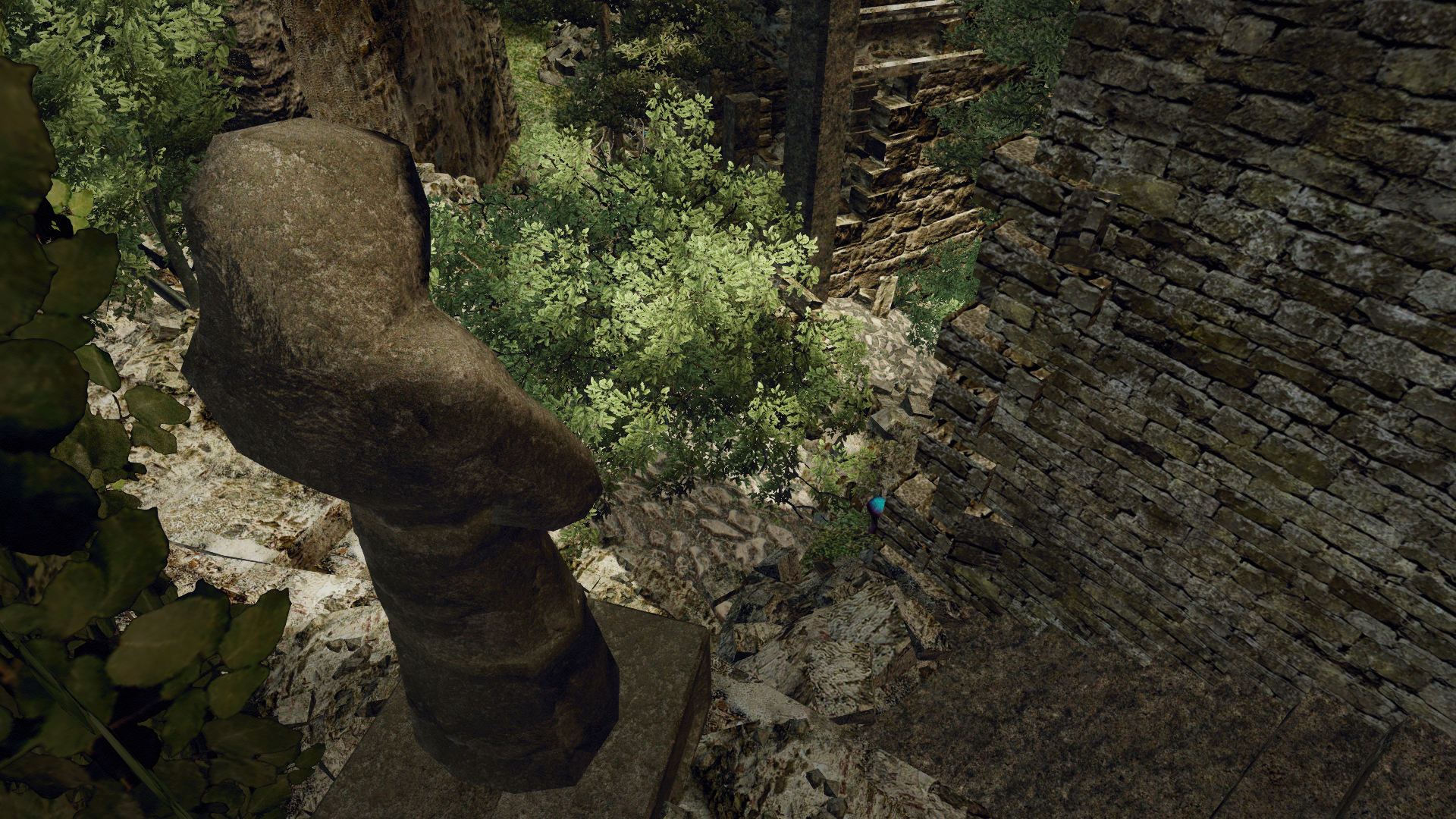 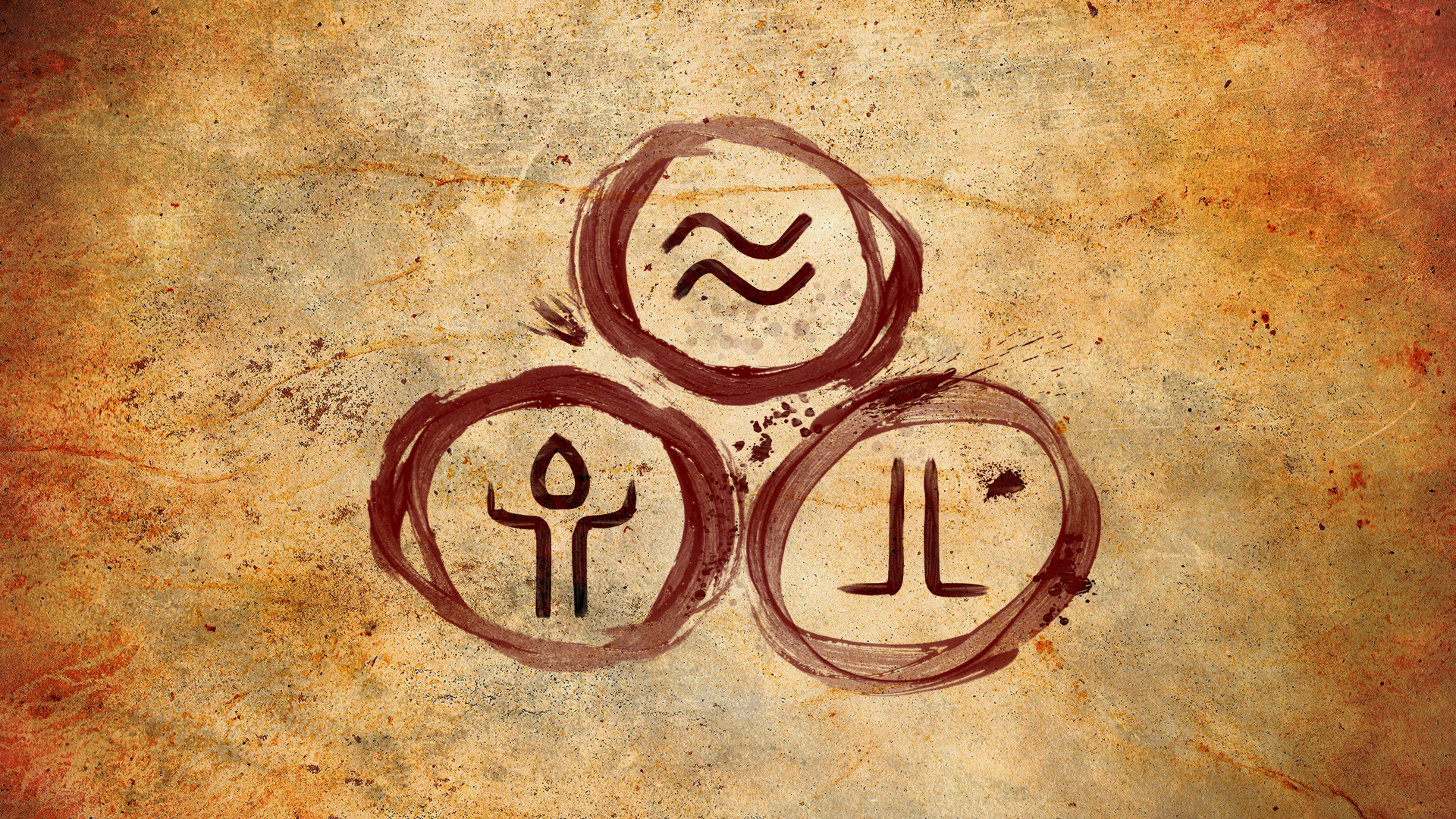