Fall holds the northern hemisphere in its firm grasp, the nature is beginning to prepare for the upcoming winter and most of the everyday life is taking place indoors. What would be better in such times then a comfy tavern? HerrFenrisWolf was tavern-hopping through Myrtana for you and the following is a report of what he encountered and discovered during this trip!

It’s time again, the warm sun of our Lord Innos is rising high in the sky and the days are long. If not for this condemned war we would be standing on the hayfields with our scythes making hay and on the stockyards we would be preparing for the winter when the cold winds from the mountains of Nordmar are rising and blowing here in the Middle Lands.

But, unfortunately, we had this war. Most yards are underused, the farmhands were drafted into the army and few returned. Those of us who aren’t already under the orc’s thumb, fallen in the Assassins’ hands or hiding at the rebel camps, could therefore use some diversion. So let’s scrape up our gold and go tavern-hopping!

The tour begins in Flint’s inn and tavern in Faring. Don’t be fooled by the quite empty taproom. Flint and his wife have been running this bar for ages and even the orcish occupation couldn’t change that. With a fine tradition Flint is distilling his booze and even the sturdy orcish warriors are appreciating this. Where orcs and their mercenaries are boozing together there’s a high demand for booze and some friction is to be expected. The gladiators from Faring are some grumpy bunch without their ration of booze. But Flint’s lucky as a regular and old friend of him could resolve this problem thus far. The bounty hunter Raven is ensuring lately that the swearing gladiators are staying thirsty. Those having one too many can sleep it off in one of the upstairs bedrooms for some extra gold. There they can dream of cold Nordmar and how only the special booze up there can warm up the frozen limbs. 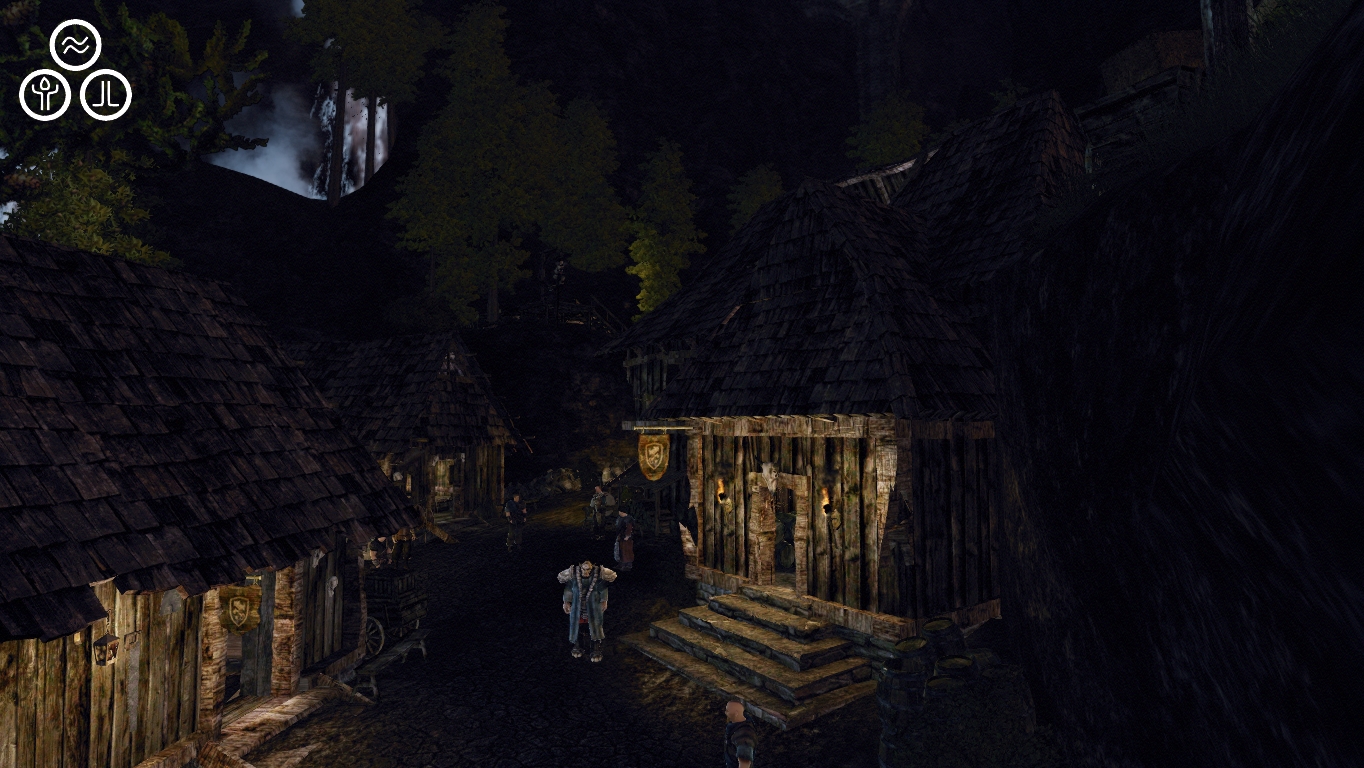 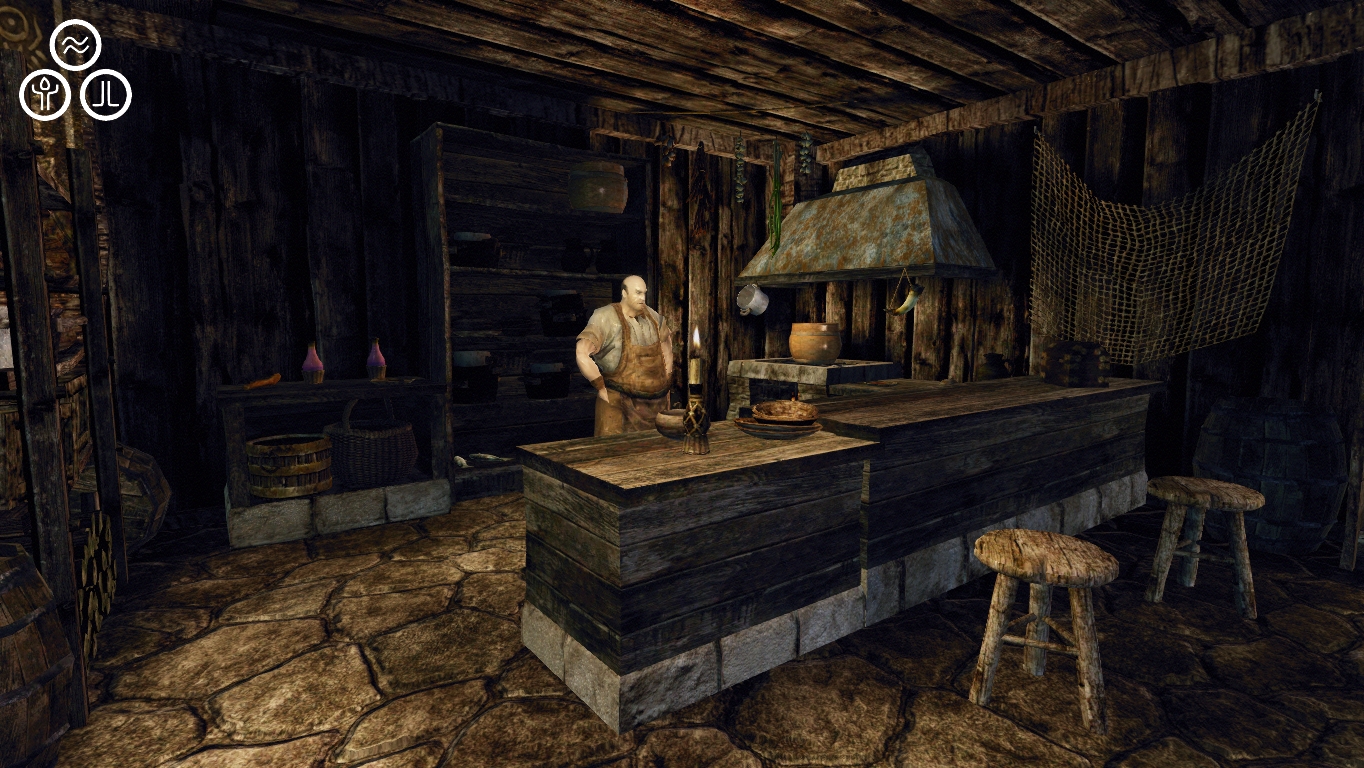 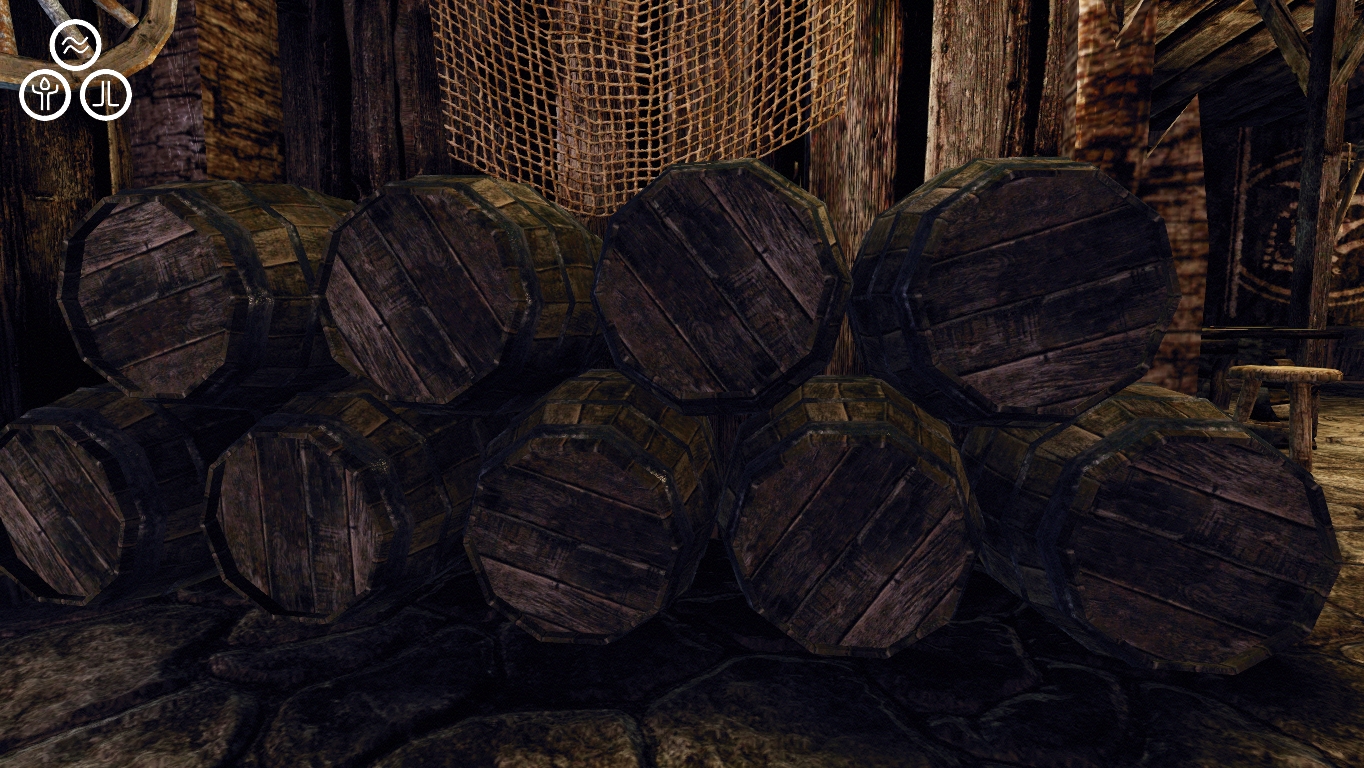 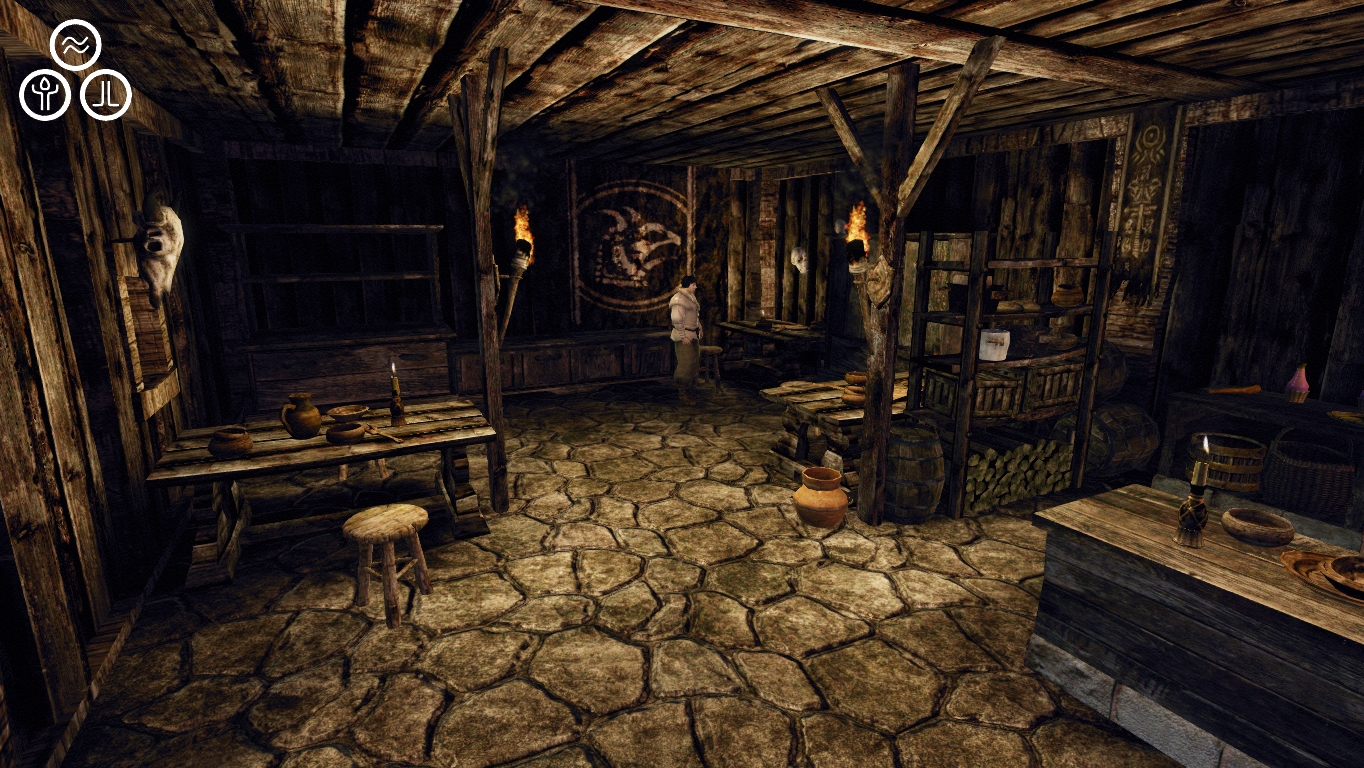 Der Schankraum in Flints Kneipe
The taproom in Flint’s pub

From Faring we’re wandering westbound, a little tipsy, where we soon can see the remains of the razed defensive walls of Montera.

There might be a big hole in the defenses, but Montera is packed with mercenaries, orcs, pedlars and other visitors so that it’s equally unlikely that someone would attack this city lightly then getting a good spot at the local tavern. The “Raging Boar” is bursting at the seams and we need to worm our way through all the mercenaries and dubious folk in here to get to the bar. 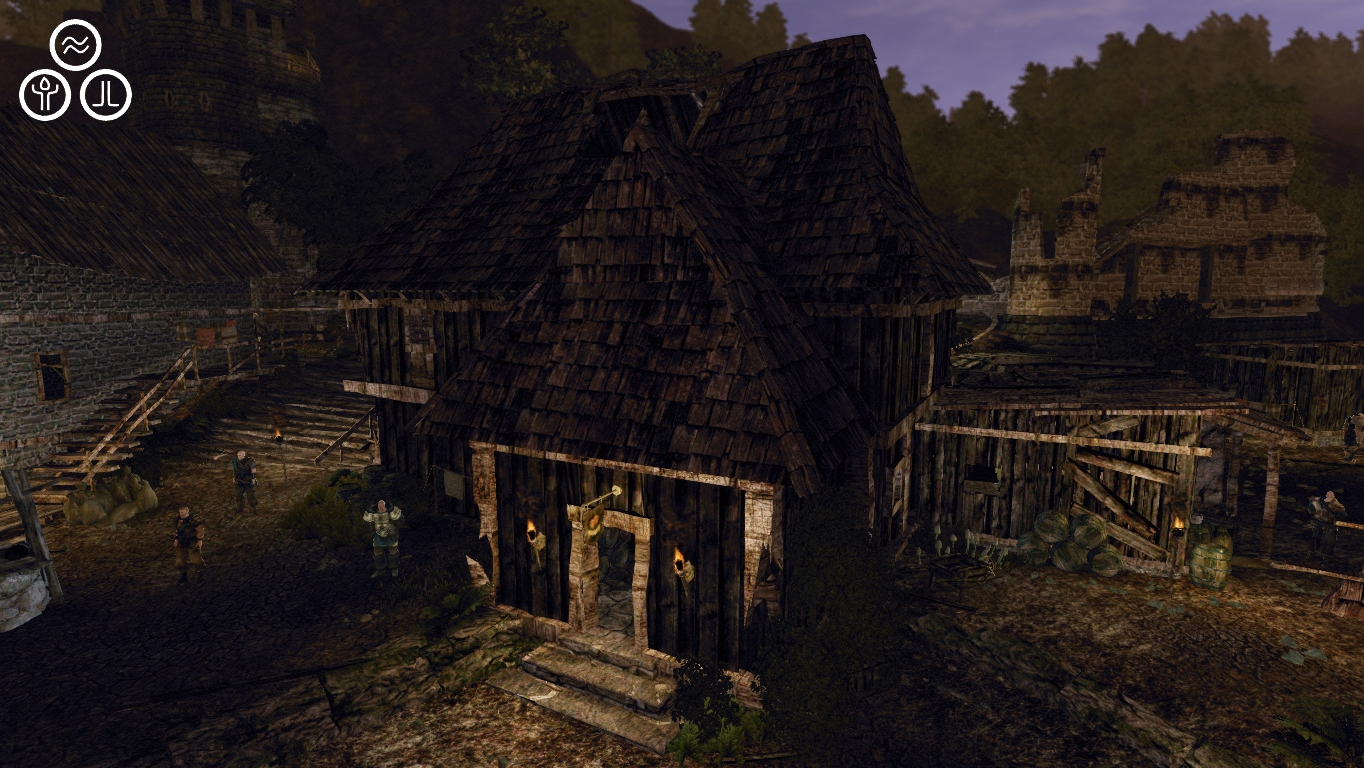 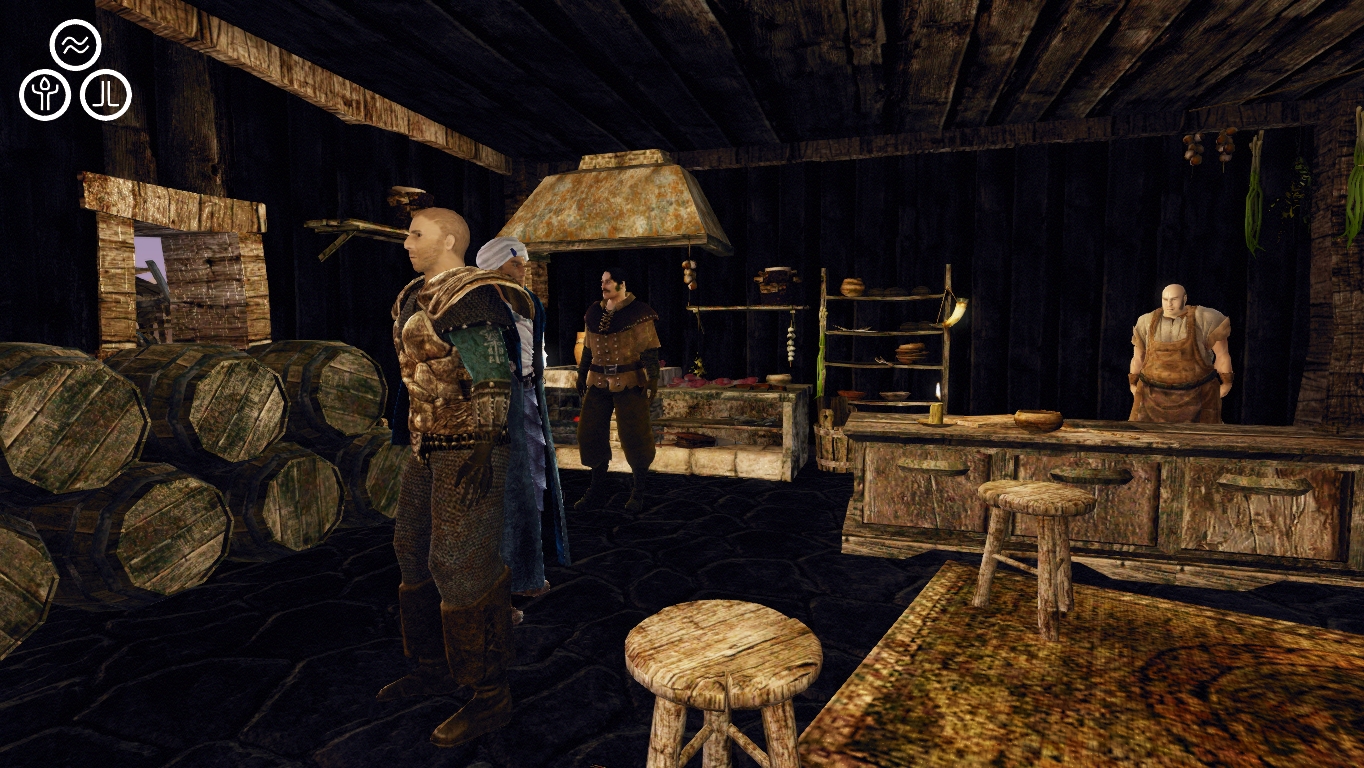 The landlord’s name is Vardo and we get a nice full-bodied brown ale from him. This tastes quite like in the good old days, even while the whole city is smelling a little bit of orc. Booze is scarce here but fortunately we have enough of it left from Faring. 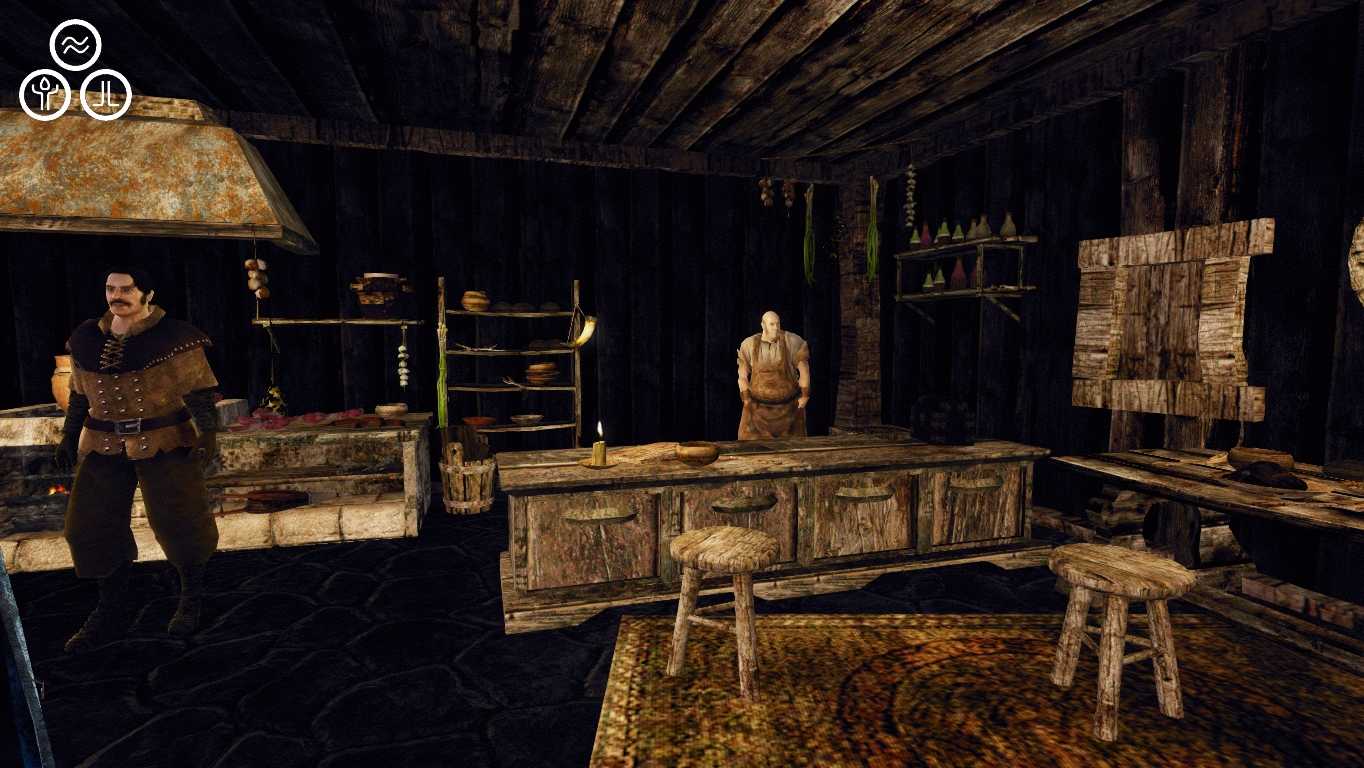 Those having enough of the ale are most likely in the right mood for visiting another of the city’s attractions, but they should be careful to hold the purse because here in Montera it won’t be a thief who squeezes the gold out of them.

A little tipsy and smiling we now make our way to the coast. On the bumpy way to Ardea you should watch out for bandits or, in our condition, at least for the potholes. Don’t be surprised, it’s not for the alcohol that you can’t see any orcs here in this coastal village. There are really none here. 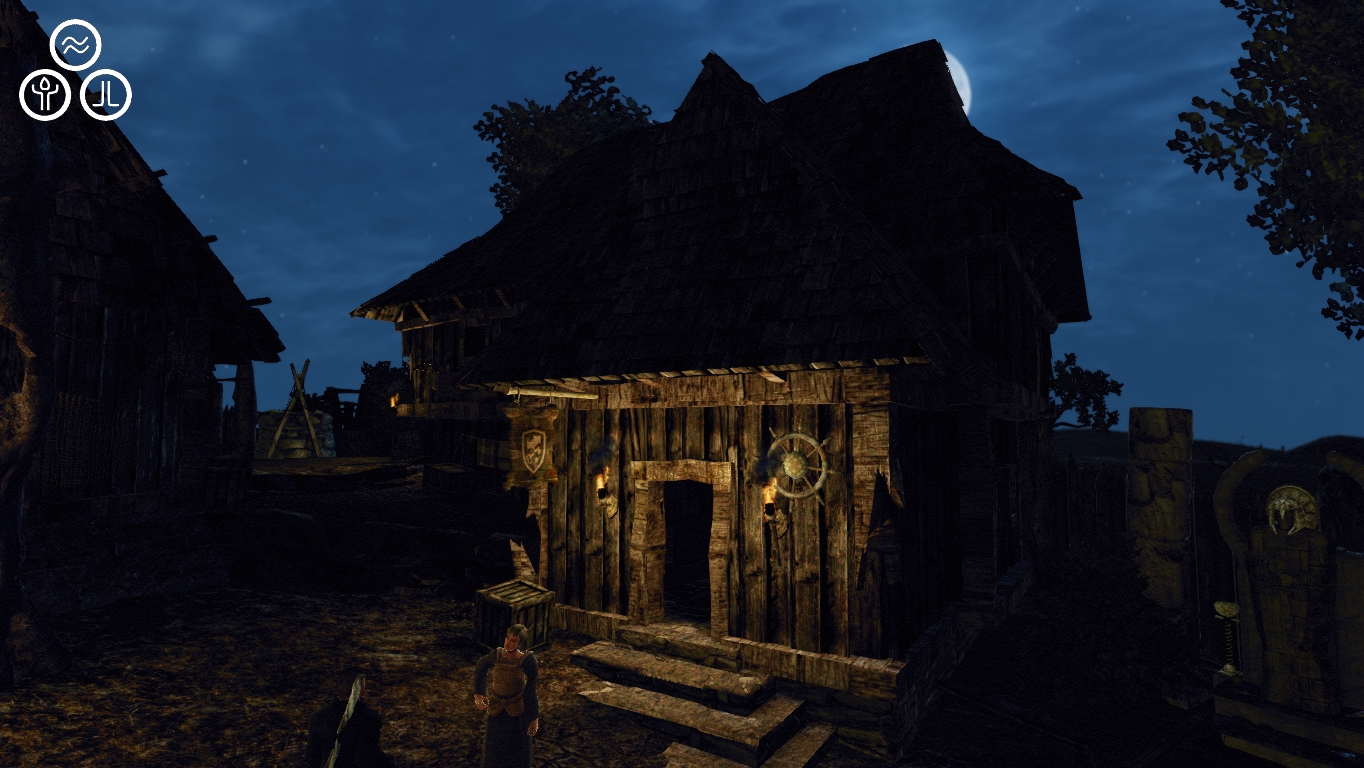 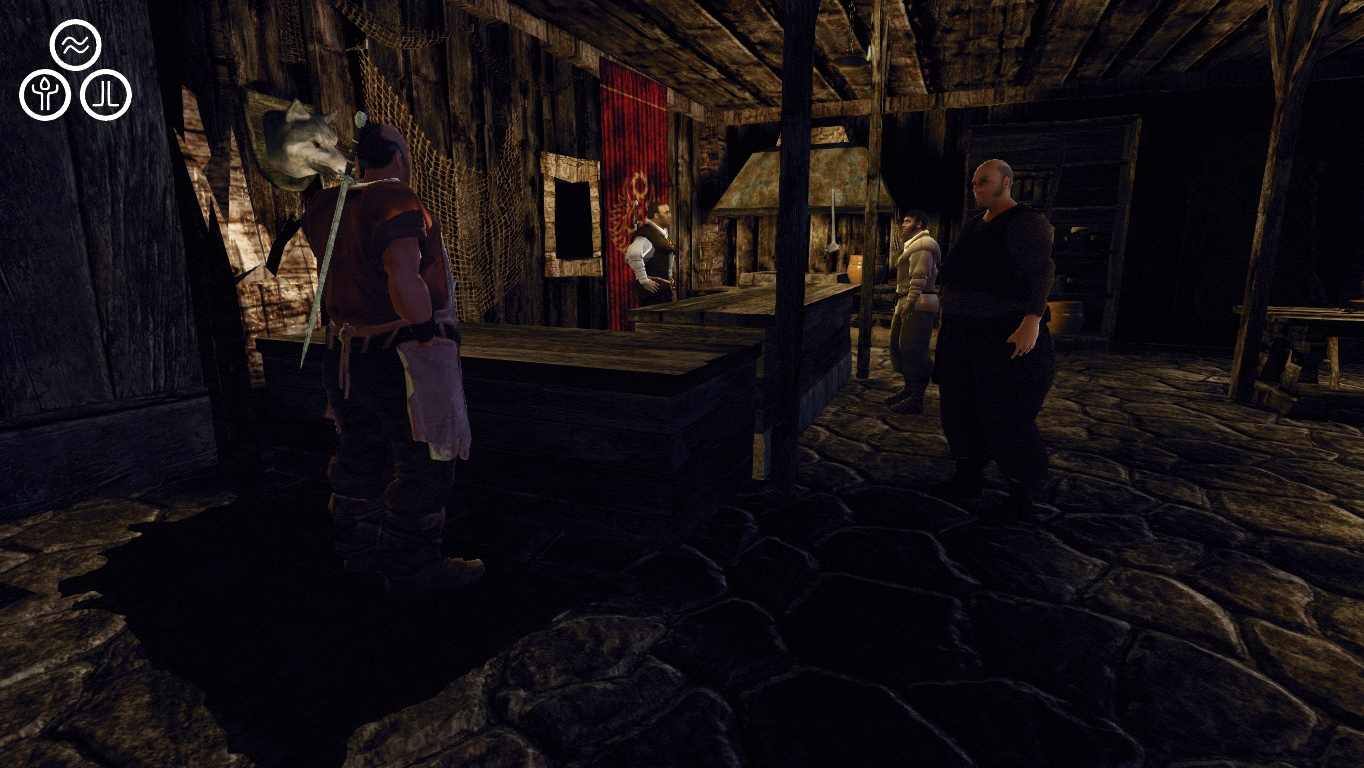 This story is best told in the “Black Corsair” and if you’re lucky the landlord himself will buy you a drink when you ask him about the liberation of this briefly occupied village because Wulf is out of sorts with the orcs. Apart from that you really should rather ask about sailor’s yarns anyway. Quite a few of the guests went to the sea in their former days and rave about the cogs that were sailing up and down the coast. Nonetheless you’re not the only strangers that boarded the Corsair. Wulf is housing some refugees from the region who live down their worries with the respective brew. 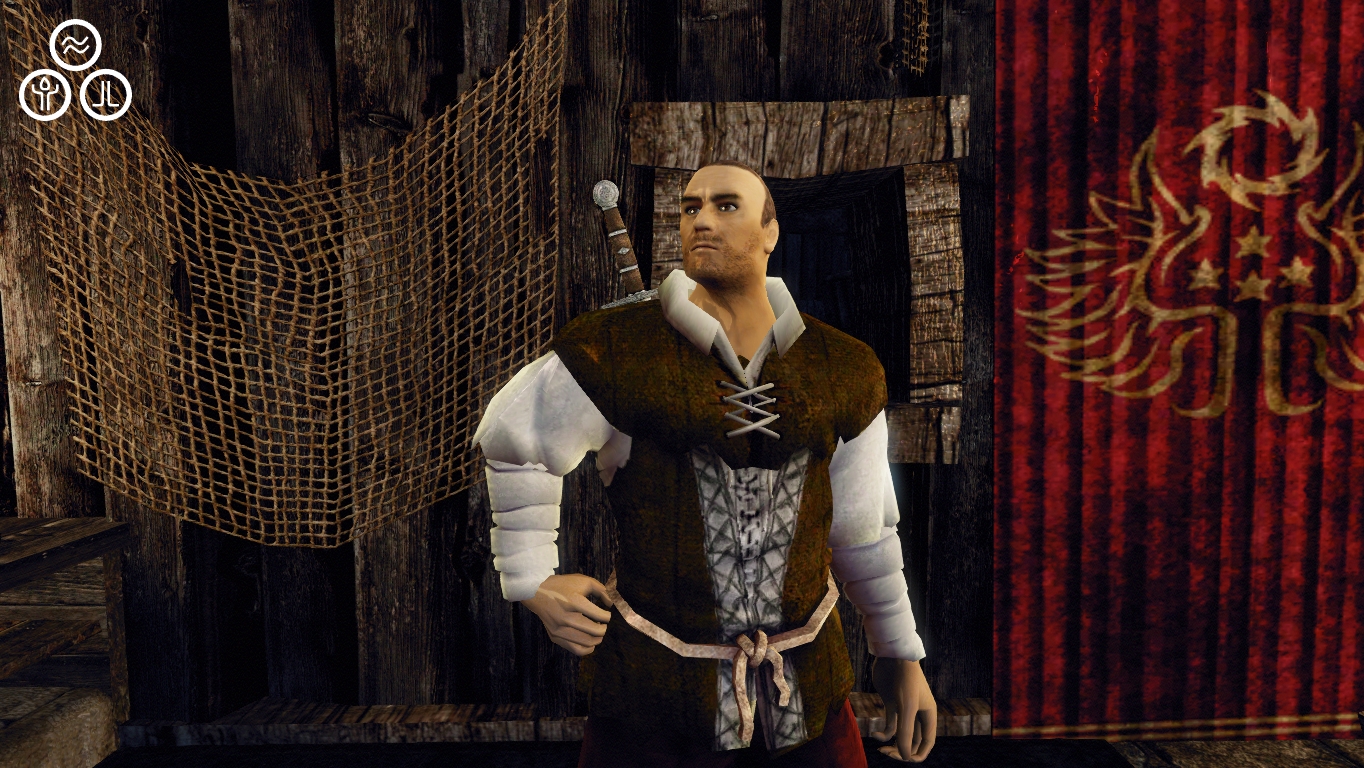 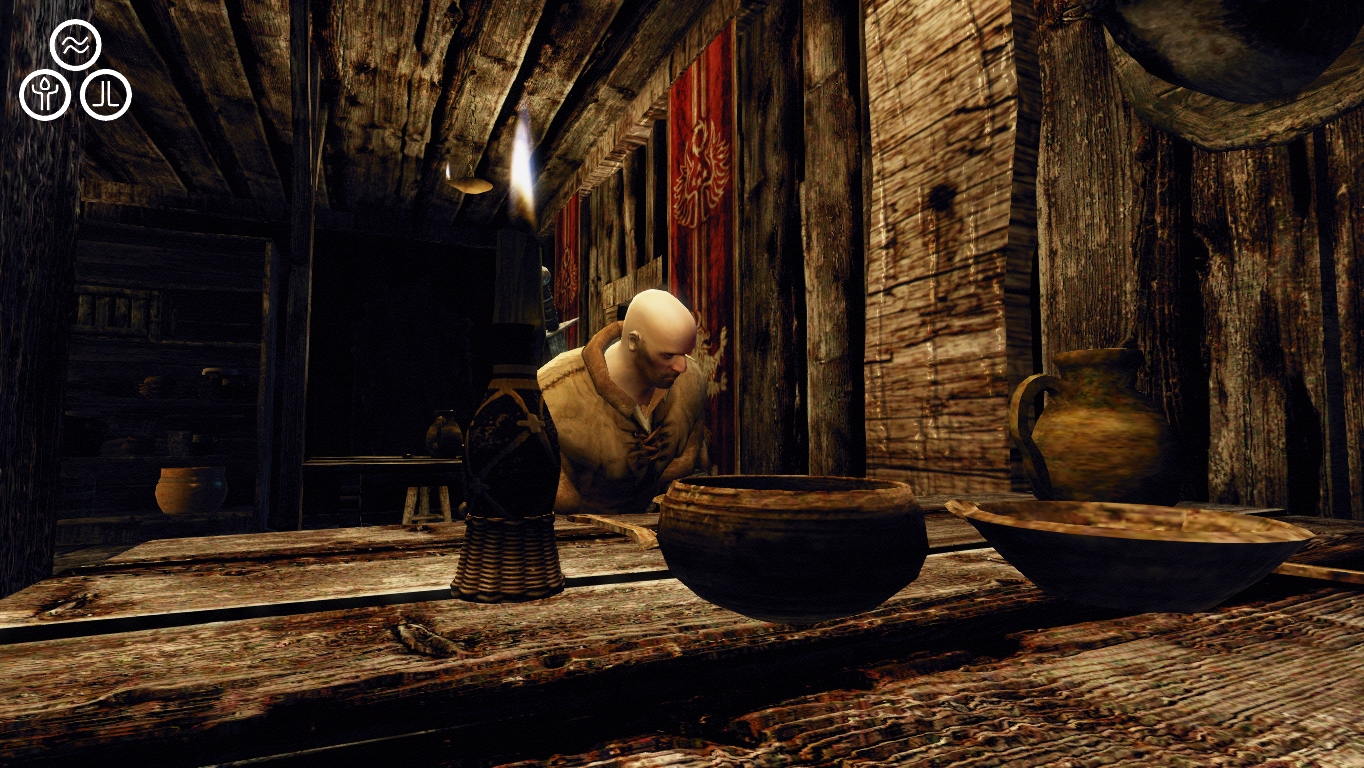 Curfew! All together we weave out of the village, down the slope to the beach. Someone has the idea to go swimming, or did you just imagine that? With a spirited jump into the cold sea your sight is clearing up. ”Ship ahoy” is shouting one of the others who thinks he can perceive a moonlit sail at the horizon. “Foolish souse” snarls another one. You and the rest of us naturally didn’t see anything so we swim back to land and go to sleep exhausted as we are right next to the bonfire of flotsam. The fishermen’s wives are swearing at the noise in front of their cottages and you’re already cursing the next day’s hangover. By the power of all three gods!

Was that it? Were this all the taverns? Certainly not! The children of the desert also know how to feast away the night. Mora Sul is the city of a thousand and one pleasures. Even the Middle Lands have more to offer. It is told that in the “Strong Arm” in Geldern a sly mercenary drunk an orc under the table. But the real booze experts and pigheads live in the far north.