Monsters, armours and swords, 3D-models are one of the most visible parts in a game. But how are they created and how do they get into the game? We talked about this and a lot of other things with our 3D-Artist controlled.

Hello controlled, please introduce yourself to our readers. Where are you from? What’s your job? And in which subteam of the CST are you?

I’m from Baden-Württemberg in the south of Germany and finished school this year. I’m going to study soon. I belong to the technicians and am responsible for the 3D-models.

How and when did you become part of the CST?

I joined the CST 2 years ago. Back than I wasn’t really sure whether my work is good enough for the CST or not, so I hesitated to apply. Then, after Hero3000 contacted me because I wrote in the CSP’s thread in the World of Gothic Forums that I’m able to create 3D-models, I did 2 work samples and became rather quickly a part of the team working on my favorite modification.

Did you have some experience with modding before?

Before I became a part of the CST? Not really. I spent some time with Gothic 3 modding before, but never fell in love with the tasks of a scripter. After the release of Skyrim I started creating 3D-models and implementing them into the game. After joining the CST I learned quite a bit about modelling and Photoshop as well as Gothic 3 specific things. 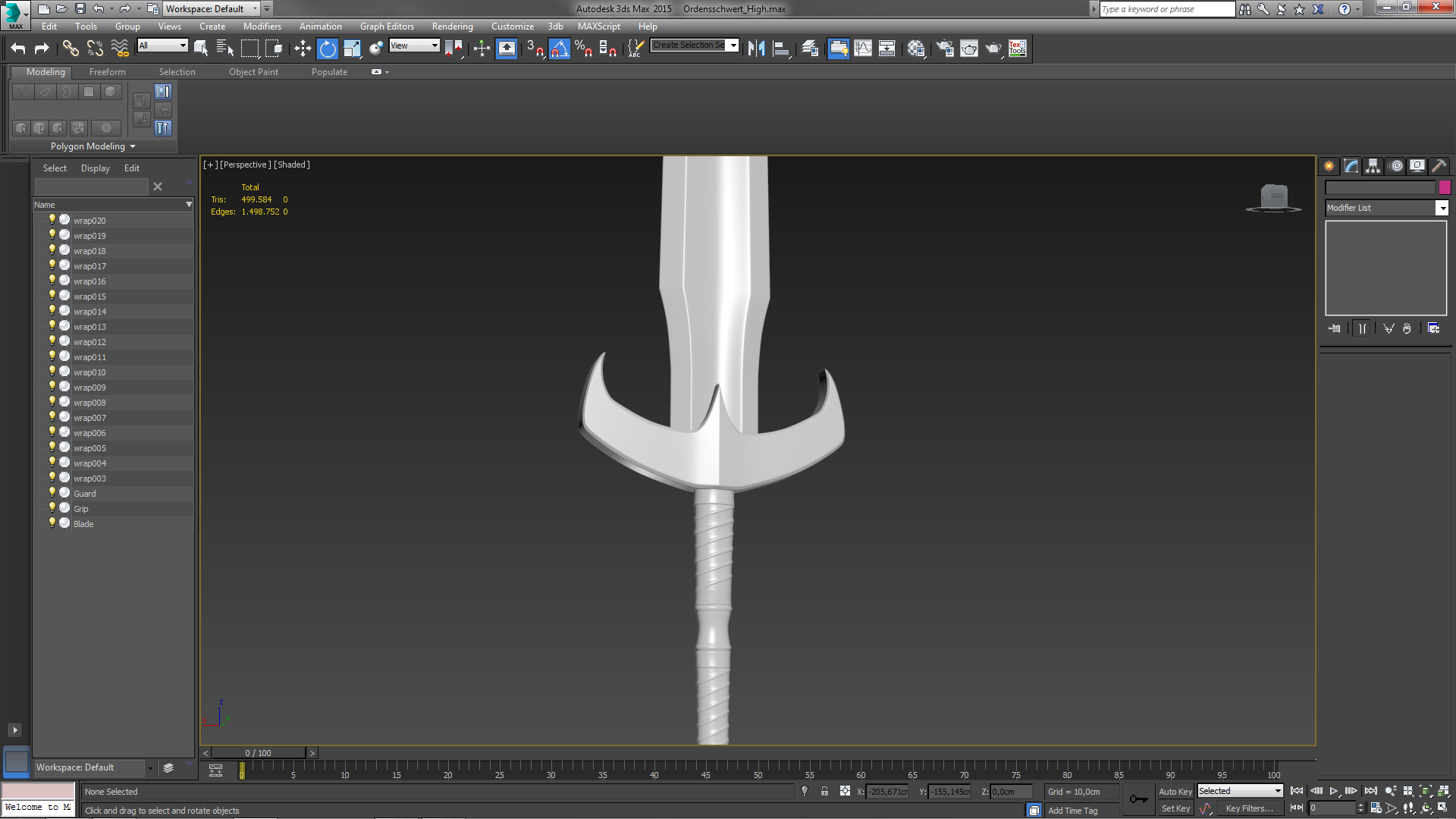 3D-MODELLING IN THE CSP: DO WE REALLY NEED THAT?

Can you tell us what you’re currently working on?

Currently I’m revising the Order’s sword, after finishing the sword of the Paladines a little while ago.

What does your work usually look like? How can we imagine what you’re doing?

It always starts with a sketch to present my idea of a specific object to the team. Afterwards these drafts are discussed by the whole team and changes are made due to their feedback. I repeat this until they like it completely. After that I start creating the model itself which gets textures a bit later. Meanwhile I show it to the team and ask for their feedback to achive a coherent style and to avoid mistakes. After working on the same object for hours you sometimes can’t realize mistakes anymore.

Which skills does someone need to have who wants to create 3D-models?

Aside from beeing able to use a 3D program aswell as photo editing software like Photoshop one should also be able to import your models and textures in Gothic 3, but is not . Thanks to the work of George, another member of the CST, and some others this isn’t really difficult anymore.

How much time do you spend for the project at the moment and how much did you overall?

A few hours per week as this is very time consuming work. Until now I spent most of the time on weapons. I also did some research how to implement new models and  specific features which were not yet possible in Gothic 3. You can see some of it in the different heavy armours for mercenaries, rebels and bandits. Currently there are eight of my weapons in the game.

Which tools help you to fulfill your tasks?

I’m using 3ds Max, Photoshop, nDo and Marmoset Toolbag and last but not least Firefox. It’s the most important one as it provides music to me all the time.

What was the biggest obstacle in development for you?

That was the trial and error for implementing new models in Gothic 3 until George published his program.

THE CSP, A MAMMOTH PROJECT

Many years of development lay already behind the CST. Does the team want too much?

I don’t know it. It’s for sure that the scripters are working themselves through enourmes masses of documents. Besides our story writers they have the most important job. But we are very focused and try not to blow the project up any more. Even if we want too much, we do it pretty well. Of course, this process can be very exhaustive, so some members left in the last two years because of that, but we managed to compensate it by picking up some new persons in our staff.

What makes the CSP so special to you? Where is it best at?

Despite the enormous dedication and will of our team it’s the fact that we don’t have any time pressure from outside. That means that we don’t have to finish the project quickly and unpolished, but have enough time create every aspect of the game manually and with a lot of  Attention to the detail.

What makes the CSP different compared to other mod projects?

The size compared tp the limited set of abilities. Huge and impressive mod projects like Enderal are usually based on easily modable games, something Gothic 3 really isn’t.

Which of the new features of the CSP do you like best? Is there something special?

Besides the great story it’s how our scripters implement it.

What motivates the team even after years in development?

Most likely it’s stubbornness. Additionally there are always new members which speed up the process. 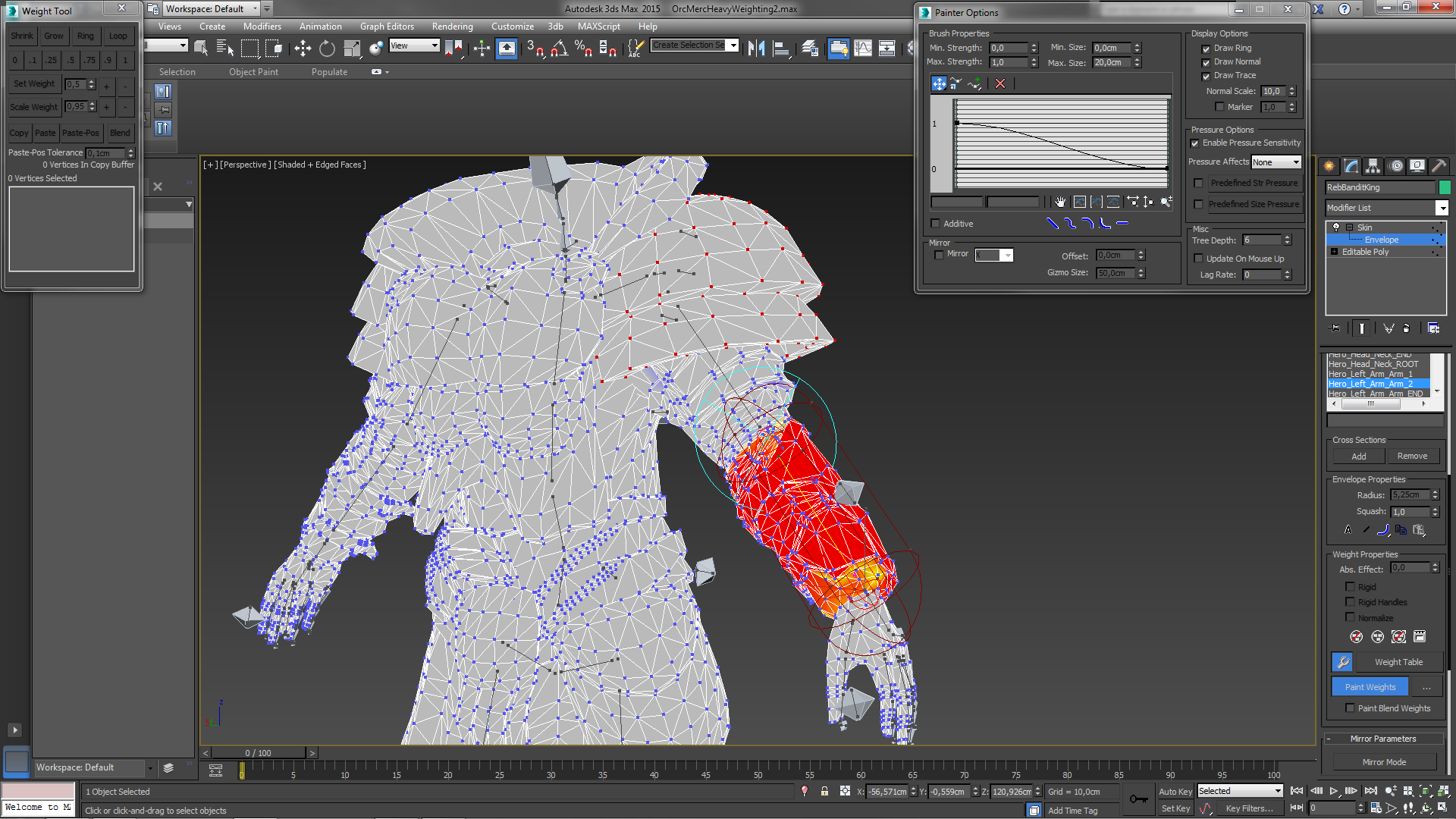 LAST BUT NOT LEAST …

What’s your personal motivation? What are you personally aiming for with the CSP?

To me the CSP is a great chance. At the moment I’m the only 3D-Artist on our team, so I can do a lot of things. This means that there is constantly something new for me to learn and master, a lot of things I only learned because I needed it for the CSP.

Is there one of your models you are especially proud of?

My early work like the maze and the swords of the ancestors. Even if I can do much better now it’s always a great feeling to look at them. They always show me what can be achieved through teamwork.

You told us before that Gothic 3 isn’t easy to mod, nevertheless you chose this game. Why do you try to mod exactly this game and not another one like Skyrim? What makes the Gothic games so fascinating?

The Atmosphere. When I started Gothic for the first time I got lost in the first minutes and ended up in the swamp camp. I still remember how fascinating it was with all those crazy guys wearing robes and having tattoos. Not to forget those blue ore lanterns. It was amazing. 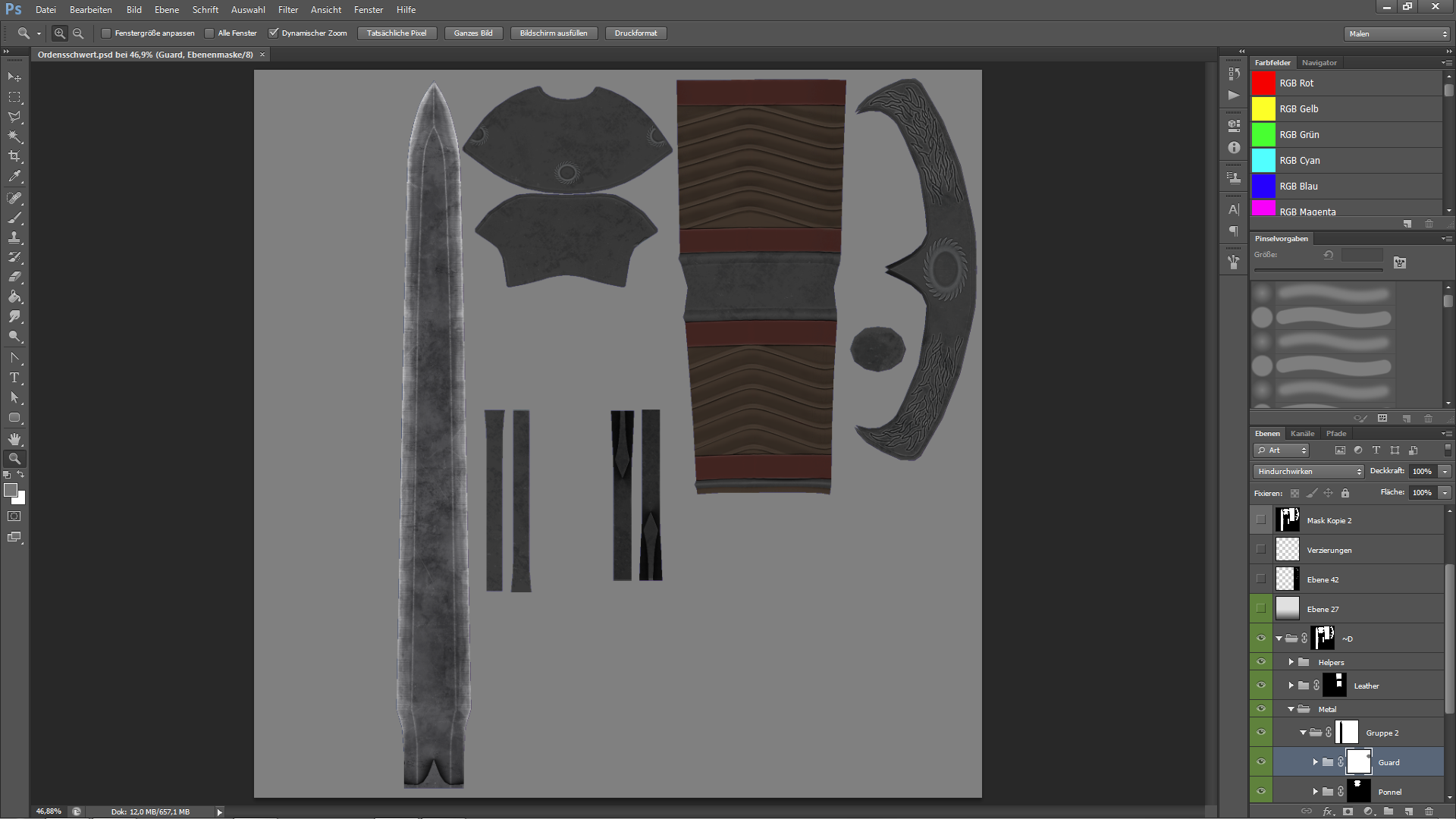 We prepared a few short questions for you. Please answer them really short.

Thorus, the eternal guard of the gate. He’s Gothic in person!

An armour for the bandits.

A huge Gothic fan donates 500 00 € for implementing a feature of your choice. What would it be?

Of course a professional voice acting on Gothic 3 standard.

Will the CSP ever be released?

I think so. But it will still take some time. 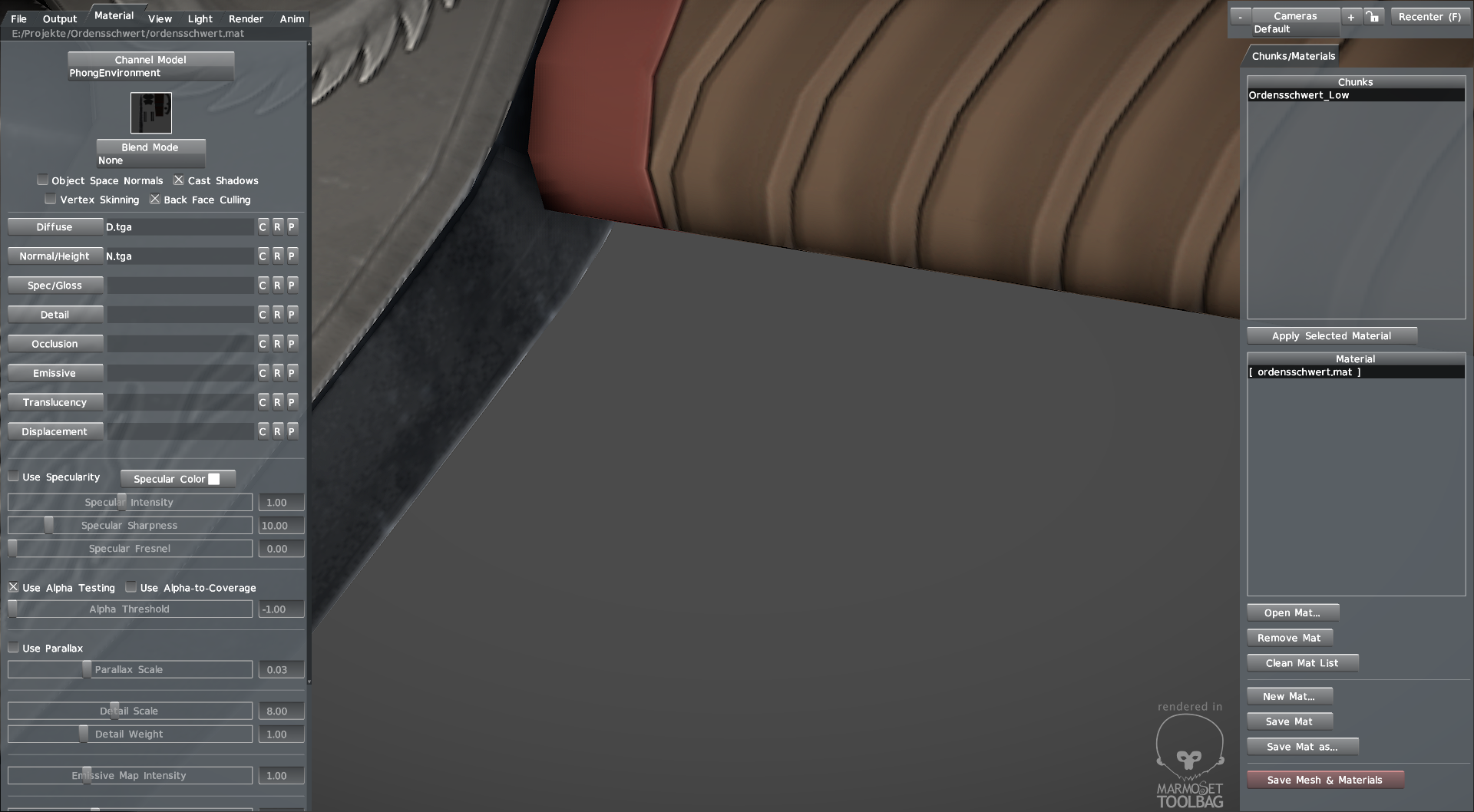 You have some more questions for controlled? No problem! Just ask them here in the comments or in our World of Gothic Thread (you can find it in the community area of our website).