With this motto Gamal introduces you to into the world of the Hashishins. Whilst one is directly at the beginning of Gothic 3 confronted with the Orcs and Rebels in Reddock and Cape Dun, Varant is far away, making it a challenge to present the Hashishins to the player that soon.

Today we want to give you some information about the hierarchy of the Hashishins in Myrtana and what path the player, who is interested in their friendship, has to take. 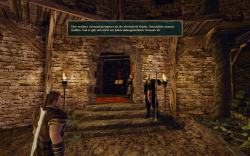 The head of the myrtanian Hashishins is Khabir, who resides in Trelis and negotiating with the Orcs about the excavations in Varant. But, unlike you might be used to from the original game, he does not grant an audience to everybody. So how can one get to him?

With his right hand, Sobota. The Hero in turn is recommend to him through Gamal, his cousin – given he helps him to retrieve his runaway slave, Harek. Sobota takes the Hero under his wing and gives him some missions, he should better accomplish before progressing in the main story line to far. Sobotas influence however is limited; it does not reach to Bakaresh.

So there is no way around Khabir. After some time the Hero finally gets a chance from Sobota to prove himself worthy: He comes to know that Khabir stationed one of his men in each city of Myrtana: Sobota in Montera, Gamal in Cape Dun, Ali in Faring, Mirzo in Geldern, Quadir in Silden. Each one of these Hashishins may run his private business, but so do all of them have been given a mission by their ambassador: To get access to the Orc leader of their respective city. 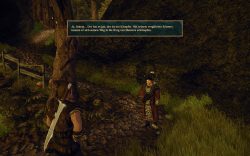 Not everyone was as successful as Sobota in Montera. That is why the Hero – at this time most likely still busy with getting access to the Orcs for himself – has to help Sobotas comrades. 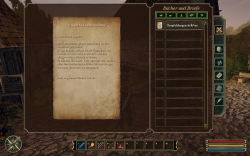 After doing so, Sobota rewards him with a recommendation to his superior. And with this one is finally allowed to meet Khabir. The stay at the ambassadors however is a short one: The Hero is quickly sent on his way, with another recommendation, to Bakaresh, where he now is allowed to enter the sanctuary and meet high priest Tizgar. 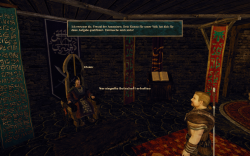 However with the arrival in Varant the journey into the world of the Hashishins only began, because the life of a Hashishin is a constant test…