Do you remember the first time you explored the harbour town Khorinis, suddenly stumbling unexpectedly into the laboratory of Ignaz, the slightly cruddy alchemist who immediately gave you the somewhat suspicious task to test his newly developed spell? Didn’t you smile when finally Miguel, the bandit in Jharkendar told you why his former master is like that today? Remember the fight between the two brothers on Akil’s farm that was only possible because of your messenger services, or the talk about thefts in the market of Khorinis that finally led you to a hidden guild. The bouncer praising the women of the house or the innkeeper giving away free beer and his competitor complaining about it. All these things that were completely irrelevant to the cause of saving the world helped to make Gothic 2 – together with it’s add-on – a really credible game and enabled the player to immerse into the world of Khorinis and the everyday life of it’s inhabitants. Gothic 3 lacked all of that when it was released. Most persons didn’t talk more to the hero than absolutely necessary and nearly nobody talked about his private life.

The many short stories, screenshots of different characters and the many documents scattered around the world already hinted that we are going to work on this problem.

It is important for us to let the player meet quirky, memorable people in the CSP, to give the image of a living world by letting NPCs tell stories, whether it be tales of war, pub-gossip or just the truisms of a poor peasant.

To make a long story even longer: today we will present you the last big project of the CSP that has remained hidden so far. Unlike the others, it was not planned from the beginning but it now accounts for about one third of the things we changed in Gothic 3, and it is one of the main reasons why we are still working on the CSP: our so-called town-concepts.

What exactly are they?

Last year, we showed you our new Ardea. Originally it was just the scenery for the first battle that you never returned to again and that contained only one NPC with a name. We quickly knew that we would change that.

But when we had finished, Ardea had gone from the least to the most interesting and atmospheric town – and it was the only one with a proportion of women. We had not solved the disbalance between Ardea and the other settlements, we had reversed it.

So now we rework every single town of the mainland. Four elements are crucial: credibility, lore, personality and, resulting from these, atmosphere.

Wasn’t emphasized too much so far. The world of Gothic 3 is a world of slaves and warriors. Women are nearly completely missing. Not as obvious, but equally bad for the atmosphere is the lack of citizens, normal people working civil jobs. Khorinis was not such a realistic city because of it’s militia and the paladins. No, it also had its rich merchants, the small traders at the marketplace, the master craftsmen with their apprentices, the normal citizens and the poor people of the harbour.

We want to create that for the towns of Midland. Therefor, in the CSP, Myrtana will not only be populated by slaves and mercenaries, and Varant will be roamed by more than just slaves, slave hunters and merchants. For example, Cape Dun will now be supplied by the two fishermen Wilgor and Alef, who pursue their trade at the beach below the village.

At night, they sleep in the two formerly unoccupied huts next to the gate, accompanied by Alef’s mother Kate and Wilgor’s wife Svestana. 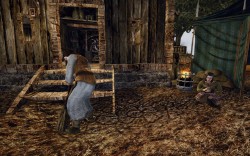 Additional women are the girls of the mercenaries, who were found among the remnants of pillaged farms and followed the soldiers out of curiosity or just to have a protector. Most of the original inhabitants of Cape Dun have no high opinion of the mercenaries, who they see as thieves and traitors, or their girls who are little better than whores to them. Their aversion is increase by the fact that both groups are mostly not from the coast. 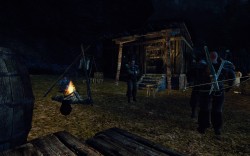 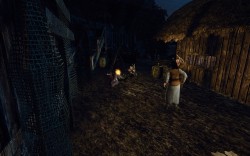 Furthermore, the lighthouse now has a keeper who inhabits it with his wife – or at least they did so, until the Orcs came. Of course, the two are not too happy about the conquerors abusing their former home as a prison. 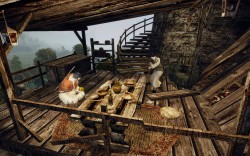 PB was never known for extensive and elaborate lore, and unlike some other RPGs, Gothic never had dozens of codex pages. Nonetheless the player could always get some background information – who erected the sleeper’s temple and for what reasons, how the three camps were founded and led, how Jharkendars’s chaste system worked, the function of Irdorath and the other dark temples…

Gothic 3 is almost completely lacking this kind of information. And many of the few pieces of lore the game offers contradict things from the earlier games (cue: water mages). We are going to change that by trying to adapt this contradicting lore to the earlier sources while simultaneously adding new background. Myths and legends told by the rangers or nomads, historic backgrounds for the big cities, tales of war or just the stories of certain characters – all this and more will be brought by our town-concepts.

The hunter Jens doesn’t live alone in his small hut near Cape Dun anymore, but is joined by his wife Hilde who takes care of the small field near their house.The two of them have something to tell the hero about the policy of the Orcs – humans who submit to the occupiers are usually left alone – and about the bandits of the coast, who are a constant threat to people who live (like Jens and Hilde) outside of town.

Several of the other villagers can also tell stories about the war. Especially Gerta, the widow of Morn, the former captain of Cape Dun’s militia. Her man fought the Orcs and was hanged for it, together with the paladins that had been in Cape Dun at the time. Now she takes care of his grave and curses the other soldiers who surrendered to the enemy, saving themselves to live in slavery for the rest of their lives. 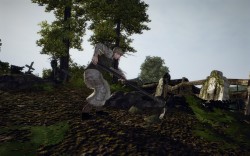 Sadly, all towns in Gothic 3 are pretty much the same. The goal is to gather 75% reputation to get access to the orcish chief, there is always the underground rebel who can be supported or killed. There is no real difference between the towns, neither visually nor content-related.

A great decline from the predecessors: the three camps differed a lot from each other due to their different architecture and colour, and in Gothic 2 we had three settlements that were already distinguished by their function: a monastery, a town and a farm.

But what makes the towns and villages of Gothic 3 unique? What’s the difference between Ardea and CApe Dun, apart from the different occupiers?

Our Cape Dun-concept delivers the answer: Cape Dun is (or was, until the war) the richer and more influential village of the two. It had an apple orchard whose fruit was used to produce an excellent cider, and only the fishers of Cape Dun were allowed to catch the famous Cape-crabs; both delicacies were even delivered to the court in Vengard, causing a lot of envy in Ardea. But today, the Orcs are deforesting the orchard, and the fishers can only catch fish. The person who suffers most from these circumstances is Old Michel. Once an important merchant, one of the two richest men at the coast and employer of half of Cape Dun, he lost everything to the Orcs. He had to give his house to the Assassin Esiel and has to sweep his former warehouse for Urkrass. 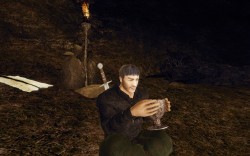 By combining these elements, we hope to create a more credible and interesting world than players know it from Gothic 3. This is the main goal of the town-concepts. New side-quests are not our focus. They will be added were appropriate, but that will usually be an exception. Don’t worry, though, the new NPCs are not just there to talk your ear off. Some of them are merchants or trainers, and nearly all of them are, in some way or another, included into existing quests. For example, Cape Dun’s lighthouse keeper might have something to tell you about the pirates, a mercenary who is relocated during the main quest might want his girl to follow him and a merchant looking for customers might find them in some other town…

To conclude this year’s advent calendar, we want to say that there is still lots to do and sadly the end of our work is not yet within sight. Nonetheless, we are making good progress (not least because we recently found a new scripter) and we are all still really motivated.

With this small update, and in the hope to have sweetened your Christmas season with our calendar, we want to wish you a Merry Christmas and a happy New Year!