All around Nordmar, the hero will often hear talk about the Orc Slayers, and among the nameless NPCs there are indeed lots of them. But so far it was never really clear what exactly distinguishes them from the normal warriors of the Clans.

In the CSP, there’s their armour, for a start. The Orc Slayers will be equipped with their own special armour, while the regular fighters will keep their old armours. 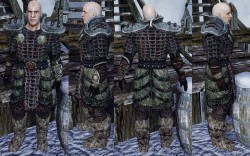 But obviously, we don’t just want to give them a different look. They will also have other tasks than the normal warriors. While these guard the clans’ villages, the Orc Slayers protect all of Nordmar. They wander the whole country and – surprise! – slay orcs.

The head of each clan’s Orc Slayers is called Herse and doubles as his chief’s right hand. Of course, such an important man must be recognizable by his armour.