For Christmas Eve we present you the already announced changes in the perk-system. 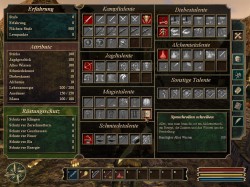 Inspired by Risen we created this new perk (the requirements aren’t fix yet as we do the balancing in the end). This is another thing that is supposed to enable the player to play a pure mage before joining a faction, as being in a faction will be a requirement to learn the old magic. In the beginning we had planned to use the desks that had been completely useless so far for writing the scrolls, but sadly, the engine doesn’t allow that, so the scrolls will be created at the alchemy tables. You will need an pell (which will be introduced as a new item) as well as a recipe, one of three divine ingredients (depending on the god the spell belongs to) and some individual ingredients that will differ from spell to spell.

The whole Community Story Team whishes you a merry Christmas and a happy New Year!