You wonder where you will be meeting such zombie-assassins? They will be at the place the undead like best, which is, of course, Ben Sala. And you already know these guys. They are Daro’s scouts who had been sent to the ruin atop the mountain near Ben Sala, who became zombies and were put to rest by the hero. This quest doesn’t change, but we want the player to see that the scouts don’t belong to the undead from the temple, but rather are assassins who have just been turned into zombies. This may again only be a little detail, but such detail make the world vivid and authentic. 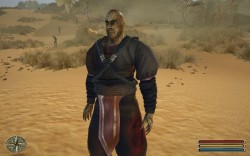