Darkness had covered the dunes of Varant like a dark curtain. The area outside the towns was only lit by a few fires in the camps of caravans and nomads. In an oasis, remote between some sand-covered ruins, there was a man about to regain his freedom. Plissken leaned against a tent pole in his new master’s camp. Around him the other slaves were sleeping on ordinary mats. None of them had any idea that one of their comrades was going to flee. Slowly and carefully Plissken cut the ropes that were restraining him in two, using a sharp shard he had found. His one eye was watching the entrance. While all the other prisoners had come to terms with their situation and fallen into an uneasy sleep, he had searched the sand until he had felt that very shard. When the rough leather of his restraints finally gave in the one-eyed man raised and stretched. He had been in this uncomfortable position way too long. When the barrier had collapsed he had sworn never to become a prisoner again. But destiny had never been kind to him and it had played some dirty tricks on him. First it had brought him into the colony, then it had robbed him of one of his eyes through the hand of one of Gomez’ guards. In the end it had been the orcs who had captured Plissken, directly after the barrier had fallen, and sold him to their allies, the assassins of Varant. But these times were over. He’d rather die than getting captured again, he thought. Carefully placing one foot before the other, Plissken slowly made his way to the exit.

He could already hear the desert winds howling. Apparently they had been too loud, as suddenly on of the ither prisoners awoke. Pausing in his movement for a moment, Plissken tried to tell the other prisoner: “Don’t do anything stupid!” He wasn’t successful, the slave began screaming: “Alarm! The new one with the eye patch is trying to escape!” Plissken had already been afraid that something like this could happen. The slaves had been broken by the assassins, they had become submissive servants to their new masters.

It didn’t take a second until a guard stormed into the tent with a drawn saber. It had probably been standing by the entrance. Plissken ducked and tossed sand into the eyes of his attacker. He wasn’t someone who cared about honour. Who stayed fair in a fight had already lost. Not losing any time, he punched both ears of his foe with his flat hands, making him blind and deaf for some time, so he was no danger. But someone who had been in the colony always made sure, and so Plissken hit him between the shoulders with the pommel of his own sword, stunning him.

Without wasting any more time Plissken ran out of the tent and sprinted towards the ruin of a wall that was just a few steps from the tent. Standing behind this wall the escaped prisoner awaited to more guards coming from north. They had probably just returned from a patrol. Holding the saber in his right hand, the one-eyed ripped a torch out of its retainer in the wall and tossed it towards his enemies. He didn’t hit them, but Plissken used their short distraction well. With a quick stroke, he opened the throat of one of his enemies, and before the other one could react, he thrust the saber into his shoulder, making him stumble. In an instant, Plissken grabbed his enemies head and hit him in the face with his knee. The unpleasent crack told the former bandit that he had broken his foe’s nose. But the guard was tough. His face twisted with pain, he managed to strike Plissken with his saber. A metallic taste spread through the mouth of the old warhorse. Spitting out his blood, he kicked his opponent between the legs, which caused the man to scream and fall down. ramming his elbow in the guards face, Plissken made sure that he wouldn’t be making any trouble for  the next few hours, either.

Plissken thanked the wind for howling so lowdly. Hadn’t it been that way, the noise would probably already have alerted the other guards. But still, he had to hurry. He turned towards the tent a last time and, directed to the slave who had sold him out, hissed “Pray you will never meet me again!”

Then he disappeared southwards, in the direction of the coast, into the dark desert. He had dropped the saber, as it would only have restrained him on his flight. Plissken would run as far as his feet would carry him. Nobody would ever again catch him, no orc and definitely no human being.

We don’t want to tell you which role Plissken will have in the CSP or where you will be able to meet him, but we still want to show you the finished NPC. 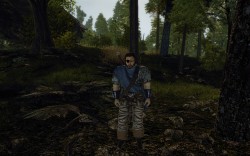