On first sight, bright clothes like these may seem out of place in the dark world of Gothic. But they are just right for jugglers and travelling people. 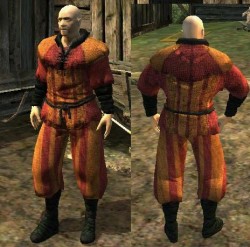 Among else, the bard in Silden, who already existed in the original game but didn’t have much to tell you, will wear it. In the CSP he will be able to perform some songs. We want to present on of these to you:

Tauting song about the empire’s church

Once I was poor and of no use at all,
lived in the drain in front of the hall.
I had to steal in order to live,
I asked for help, no one wanted to give.
I prayed to Innos, god of the sun,
prayed for a better life to come.
To enter the cloister I had desire,
Wanted to become a mage of the fire.
Finally I became fat and bold,
now I can legally steal your gold.