In our opinion, one huge Problem of Gothic has always been the trouble you had trying to play a full-mage. Especially before joining a faction in the first two parts, it was hardly possible at all to make your hero a full-flegded mage and not a conventional warrior.

We can’t completele change this, but we decided to allow the player to play an authentic mage before joining a faction. As we thought such a mage should also have an adequate robe, we desinged a light, neutral robe, so to say an equivalent to the leather armor. As there are no independent mages in Gothic (apart from Xardas), this isn’t a mage’s robe in a narrower sense, but a garment that is from now on worn by all alchemists in Myrtana, who will also sell it to the hero. 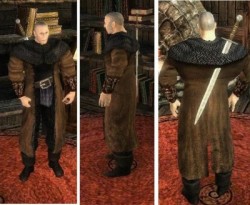