Community Story Project at the Gothic-Modderconvenction 2011

The annual “Gothic-Modderconvenction” was the first time we presented the “Gothic 3 – Community Story Project” to a team-extern group. For this event, our storywriter “HerrFenriswolf” and his co-worker “Schreiberling” set out to represent the “Gothic 3 -Community Story Team” – with a playable pre-alpha-version of the CSP, which could be marveled at by the assembled modders.

As we don’t want to hold the events of this convention from you, the community, HerrFenriswolf wrote a little report about the presentation in his typical way. We hope you enjoy reading it, and at the request of HerrFenriswolf, a picture was added, too.

A report about a presentation, a man in a womans body and the eternal question “Where is Lester?”.

So here you are as a representative for a, if not THE, Gothic 3 Mod, at the Gothic Modderconvention. The third Convention in a tradition, wich knew only Gothic 1 and 2 mods so far. In a casual atmosphere, the attendants present their mods, their work progress, provide help, make friends. To make a long story short – you get to know the interesting people behind the nicknames. Gothic 3 is running on my small, chattering netbook with the newest version of our Community Story Project. One could say we are the third presentation of the first evening, so the attention is very high. 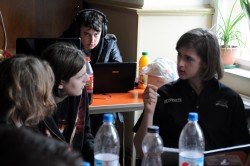 Some look critically, some curious, but everybody is excited. Nicos beamer shows the scene from Ardea. Orc-corpses are everywhere, the four friends gather around the campfire and a displeased governor is nagging about the just accomplished heroic deed. The sonny with the keypad already attached new weapons to the hero and pulled a black hood above his head.
At that point, Gorn opens his mouth interrogatory: “Where is Lester?” My keyword – the entrance into the small, improvised presentation. While Schreiberlings son goes to search for good old Lester and along the way shows some features like diary entries, new dialogs, weapons, pieces of armor etc., I talk about the modification and the team with my own peculiar humor. Schreiberling keeps in the Background and adds something reasonable to my explanations from time to time. By now, the hero has arrived at Milten, the chapter screen appears, epic music resounds. Suddenly, it changes to silence and darkness.
My Gothic 3.exe commits suicide and we see the question about the notorious Guru. The audience and me would truly have preferred Lester. “If something doesn’t work on the first try, just try again.” Following this saying we start Gothic 3 again and only see the progress bar. A little embarassed, I try to bypass this forced break with even more information. I tell about some of the surprises in the world, explain, to which questions that came up during the former parts of the series we go into. I also name our aim – making the story line of the game so considerably playable that you can still find new things on the sixth time you beat the game.

Fenris after the modding convention

The progress bar disappears in what feels like double time step. I take control over the former ship owner and quickly teleport him to Montera. There, it’s essential to visit the brothel “House of Stars”, which was announced in the news. It’s completely furnished, but there are still a lot of place holder NPCs. A lady named Bruno is attracting the attention of the audience. One click later, the busty and scantily-clad lady says with a dense, raspy voice: “I only clean this place.” The crowd bursts out laughing. Bruno, the beautiful housekeeper of the brothel, took the hearts of these hard-boiled modders in a moments notice. First calls for leaving this poor guy in a womans body are made. I think I can even remember some proposals of marriage. On it goes. After we saw Aram, the dark mage from Myrtana, whose master was hanged by the Orcs, we grab some new weapons and attack some NPCs. Sadly, our hero doesn’t stand a chance against whole Montera, so we loose the fight without further ado, but very well dressed.
The presentaton ends here. We answer some questions, get some bottles from the crate of beer, return to the spectator perches and watch the next presentation.