Often people have asked us for new information from our story department. It‘s not that easy though. The setting – which, in the case of games is often revealed in advance – is known. Revealing everything else would, at least in part, result in massive spoilers. Still, or rather because of that, I have been thinking how we can show you, that we not only have pretty meshes and textures of weapons, but are also able to include interesting quests, without betraying too much.

So, here I present you the result of my contemplations (at least one – in the time coming, there could come more information from our story department).

Below, I will explain to you how a quest is created. Of course this will not represent THE order of events when writing a quest. It can also take place in a completely different way. And I also do not know how my collegues are working. Surely everybody has his own personal methods. This will just be about a small part of my own work. Still, in my opinion it gives a good impression of the things we are doing.

Of course the text will contain spoilers, so think twice before you decide to continue reading. At this point though, I can already give an all-clear signal: A location of secondary importance in Montera will be described, including a side quest involved. So you will not be robbed from all the fun if you keep on reading.

The House of Stars – Myrtana’s best brothel. Truly not a piece of art, especially when one realizes that is the only one. A brothel would enormously contribute to the atmosphere, one in every city however would be overdone – we all agreed on that.

Impi brought it into motion: He opened a thread on the subject « house of pleasure » in our internal forum. Some possibilities and options were briefly discussed – a prostitute who tells that the orcs have closed the brothels in the country to explain the lack of them? A street-walkers’ patch? A real house of pleasure? Expand Zuben’s harem in Ishtar? Soon a number of useful ideas crystalized. The whole thing took on shape. We decided to pick Montera. Montera and Geldern were the only cities in Myrtana, which would lend a brothel credibility. Vengard was discarded, because it was ruined. Also a building was found quickly. Directly next to the arena. Big, but unused. Now Fenris took the initiative, our man with the ideas. He created a rough concept, and gave names to the brothel itself and the characters – madam Hannah and her three prostitutes Lily, Francesca and Charlotte, and the doorman Gruntuk. Roughly he determined the character traits of the figures, and the background story of the brothel.

The whole subject was laid to rest for a while. Other things were more important. But then I took the concept and worked on its implementation. First of all, Hannah was renamed Bertha, to prevent her from being mistaken for the hotel-keeper from Gothic 2. I had another look at the brothel-thread and my eye caught an idea from WitchKing, that I had already forgotten about. On the basis of this idea Bruno was added, the poor dog who couldn’t pay his bill, and now has to work as a cleaner to pay off his debt. Also an idea of my own, that I completely forgot about, came back to me. This was the hour of birth of Nina, an inhabitant of the brothel who refuses to sell her body. As a last thing I expanded the personnel around Magdalena, another prostitute, who serves to give more substance to the story of the brothel’s origins. With that there were enough NPC’s for the time being. The writing of dialogues could commence.

For the time being, we will not reveal more about Bertha, Lily, Francesca, Magdalena, Bruno and Gruntuk. You shouldn’t know the brothel inside out before the mod is released. Let us turn to Charlotte instead, who, in contrast to her collegues, has not only dialogues but also a quest to offer. 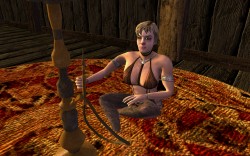 Fenris description is kept short: A blond girl from the capital Vengard, she fled from the city when the harbour was fully destroyed, because her family was killed at the time, and there was nothing left for her to stay. She likes to smoke weed to flee from her memories, Hannah takes care of her because of that. There should be the possibility to talk her out of smoking, or to sleep with her for some joints.

So far, so good. Enough room for me to play. I don’t ponder, but begin to write the dialogue. The ideas come along. She likes to smoke weed? So we put her at a waterpipe for a start. When we talk to her she asks for a joint. The hero will have to give her one, to start up the conversation. Conversation? What’s in a name! At first Charlotte won’t be very talkative, I decide spontaneously. This just leaves the possibility a spend a few happy hours with her. It’s her profession anyway. Here I stick to Fenris guideline: The good girl expects to receive a second joint. The conscience of the player is tested.

Independent of what the player decides (to make sure that one makes a decision, I determine that one has only the option of giving a joint or not – the « end »-option here will have to be removed by the scripter) Bertha will now talk to the hero. She is either grateful or angry, depending on whether one has given the girl a joint, or not. Now you can hear out Bertha about Charlotte. She however doesn’t know much about the prostitute. While she mothers over the other girls, Charlotte is completely tight-lipped towards her. And the swamp weed can’t be talked out of her either. Stop! I take a moment to contemplate. False logic must be avoided in any case, and here I have one coming: Why does Bertha place a waterpipe in front of her nose? Instead, she should have taken it away. I don’t have to think a long time. We have already solved much more difficult mistakes in the logic before – it isn’t without a reason that Charlotte asks the hero for a joint of swamp weed, when he wants to sleep with her. She demands one from any of her suitors. And the mercenaries always have some with them. So, to take the waterpipe away makes no sense. I continue with the text.

A reputable hero will of course offer Bertha his help. The quest starts. The first real big problem knocks on the door: Someone once had the idiotic idea that all quests should have their own names. For others, this is not problematic. But this isn’t my strength. Because of a sudden inspiration I call it „Haze of Oblivion“ – after all, Charlotte smokes the swamp weed so she doesn’t have to think about the deaths of her relatives. That went relatively easy for my circumstances. So, let’s continue. 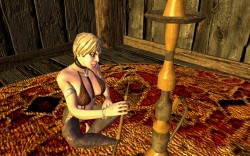 The hero speaks to Charlotte. And soon he learns what the problem is. We all know it by now: Charlotte’s family was killed. I make a few changes to Fenris idea. No, they didn’t die in the attack on Vengard. They fled the city in advance and were assaulted by bandits on their way. Two things drive me to this change: the simple logic of it – when the city was under attack, the besieging forces had already surrounded the city; Fleeing wasn’t impossible, but difficult – and Charlotte’s sentiments. She works in a city controlled by orcs. Her customers are mercenaries. So, it seems she doesn’t bear a grudge against the occupants. So it makes sense when they are not responsible for the deaths of her family members.

Beside that, I expand her „family“ spontaneously with a fiancee, for which she felt undying love. That creates a bit more drama, and increases the sympathy felt for Charlotte. The term « family » is so unspecific. Something faceless, that could mean anything. One should prevent exactly that, when writing.

Now it gets interesting: To talk her out of taking that stuff. So far, so good. The hero must explain to Charlotte that her family wouldn‘t have wanted this, and that life goes on. But that doesn’t suffice. Charlotte must realize that she has found a new family in Bertha and her girls. I let her bring up a few times that no one can understand her sorrow. It seems only natural that she secludes herself and tells no one of her pain. It‘s just that, what the hero should try to get into her mind.

Quest solved. But until here it is rather boring. This quest is only made out of conversations. That is allowed, but it is not very exciting when the player only has a few options for conversation to choose from, which make it clear that they lead to the goal. What it takes, are different possible answers. The quest should be able to fail. I get a first idea: the hero tells Charlotte that there are still people who care about her. This she will only believe, when he has not already given her a second joint for a few hours together. Else she will not believe a word of it, takes him for a pretender, because he first gives her weed and then tries to talk her out of it, and argues that the whole world only wants to take advantage of her. That will make some players, who, for a start, (and before the start of the quest) didn’t give it much thought, appear pretty dumb. At least that is what I am hoping for.

But this is still not sufficient for me. During the conversation the memories come back to Charlotte. She begs for another joint, to be able to relax. Of course the quest will also fail in this case if you give her one, and Bertha will be pretty angry. But now you can sleep with her as often as you like, as long as you bring her swamp weed.

With that I could finish. But one last idea comes to me: the fiancee – I spontaneously called him Victor – wasn’t dead at all, only severely injured. And now he is sitting in an inn getting drunk. I decide myself for the one in Faring. That makes sense, the castle isn’t that far from Vengard. Also, the inn over there is somewhat empty and can use a little bit more liveliness.
Of course the hero will tell Victor, that his great love is still alive. But it would be too easy to bring the two together, and let the happy couple move into a beautiful house in Geldern. No, instead I decide that Victor will not be very happy with the new profession of his fiancee, and will abruptly decide to not want to have anything to do with her anymore. To tell her this will finally break her heart and lets the quest fail as well.

But wait! What if the quest was succesfully completed, Charlotte had forsworn the weed, and befriended her collegues? Then she would have left her past behind her, and she would no longer care – the quest shouldn’t always end with a completely broken Charlotte.
With that I had completed it, and turned myself to the rest of the brothel. Quest finished. JüdeX end.